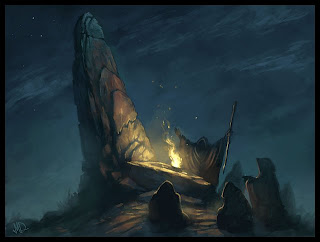 Wizard (Sorcerer) characters start out knowing a few spells in their spellbooks as per Castles & Crusades rulebook pg.23. Sorcerers start with a number of Power Points equal to their INT score. These power points allow them to cast their spells. Each level of experience adds 1d4 Power Points. 0 level spells (cantrips)can be cast anytime, and do not cost Power Points. Generally, the cost of casting a spell is the number of power points equal to the spell level. The effects of the spell are limited by the Sorcerer's level.

Some spells will have alternate names for better flavor to fit the setting.

Sorcery had survived the cataclysm that befell Xhuul. Those few cultists that did not die during the great war passed on the knowledge to their descendants or wrote it down in foul tomes. Much of this knowledge has been lost as some descendants who were taught the spells fell victim to the harsh Xhuulian wilderness, or the books themselves misplaced or hidden, then subsequently forgotten. Given that sorcery was taught by the alien gods and their servitors, it came at a high price to the sorceror's mind and body.

The act of casting spells can sometimes make changes to a Sorceror. Any spell cast by the sorceror has a 5% chance (1 in 20) of causing an Affliction. A roll is made on the Afflictions Table. Unless specifically noted on the table entry, the afflictions last 1d10 x10 hours.

Afflictions over time can greatly debilitate even the most powerful sorcerors. This is why many seek to find ways of ridding themselves of their afflictions. The common method of this is to transfer these afflictions, even temporary ones to others. The 4th level spell Shiggoboth's Spell of Transferance is commonly used by sorcerors for this purpose. However that spell comes at a cost of 1d4 CON.

The sorceror has a limited pool of energy in which to cast spells, as these are taxing to the mind and body. The character's starting Power points at 1st level is equal to their INT score. If a Sorceror uses all their Power Points, he/she is exhausted and cannot perform any activity besides rest. They can move at 1/2 speed, but cannot make any other kinds of attacks or actions. Power Points are regained at a rate of 1pt per hour of rest. Most sorcerors prefer to drain power from magic items that can store Power Points within them, instead of using their own personal Power Points. Some sorcerors prefer to drain power from their minions or enemies to fuel their spells.

Gaining new spellsa re as per rules in the Castles & Crusades Player's Handbook.

Posted by Greg Johnston at 1:45 PM