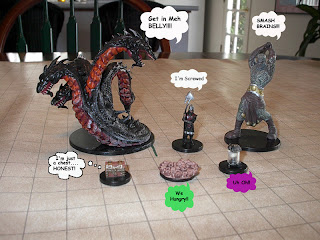 I picked up a box of WoTC's pre-painted plastic minis from their newly-released Lords of Madness set. I've slowed down in my minis purchasing, but this was purely an impulse buy at my FLGS Brookhurst Hobbies in Garden Grove. I think the price is a bit steep of $22.00 for a box of 6 minis. Albeit you get one Huge mini, a Large mini, and four Medium sized minis. However, there is an appeal to the "Crackjack Box Toy Suprise" feeling I get from buying one. You just don't know what you are going to get.
From left to Right: Heroslayer Hydra (Huge), City Guardsman (Medium), Stone Giant (Large), Trapped Chest (or Mimic) (Medium), Rot Grub Swarm (Medium), Brain in a Jar (Medium).
I think I lucked out with this box, because I really did want the Trapped Treasure Chest and Brain in a Jar minis. And I got both in the same box! The chest can double as a Mimic. The Brain in a Jar i just think its cool because it reminds me of the Migo Brain Cylinders from H.P. Lovecraft.

Email ThisBlogThis!Share to TwitterShare to FacebookShare to Pinterest
Labels: minis