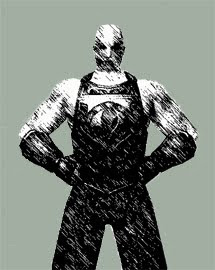 The Grey Men are artificially grown in the alchemical vats within the Great Black Ziggurat in the city of Hlatl. They are genetically programmed to be completely loyal to the Grand Hlat no Mental Mutations can override this programming. They have been created to act as the city's guardians and special military forces. They also serve as the personal guard of the Grand Hlat. They appear as 2 meter tall male humanoids with a light grey skin tone. They are physically athletic in build and are completely hairless. They have small black bead-like eyes, slitted nostrils and a large gash-like mouth. They are usually marked with a bar-code like tatoo that helps to identify each one. The Grey Men who actively patrol the city or stationed at the gates usually wear chainmail armor and are armed with longswords and crossbows.

Posted by Greg Johnston at 5:02 PM