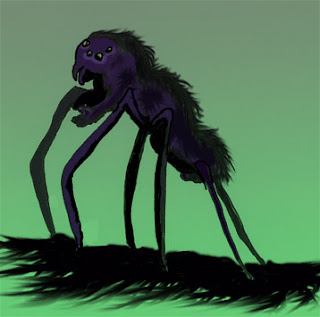 
The Xycil are a relatively peaceful spider-like mutant species that maintain the infrastructure of the city of Hlatl. They are usually found in groups cleaning up trash and debris, repairing structures, or tending the fungal farms. They are not encountered as much on the streets of Hlatl, but are very common below the streets. When the Xycil are not working, they return to their hive where they rest until needed.

It is unclear to most how the Xycil communicate. It is not common knowledge that they are telepathic. They use this ability to communicate with each other and never with creatures outside their species. Witnesses have seen them vibrate their legs and body movements and believe this is how they communicate. Xycil do not like to interact with humanoids and usually avoid or ignore them. If confronted by hostile action, they retreat immediately.

Posted by Greg Johnston at 1:37 PM