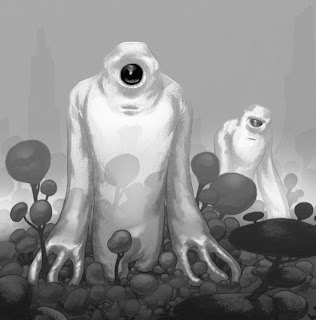 These creatures appear as extremely tall humanoids with over-sized arms and a dark black cyclopean eye. Their bodies are transparent. Ashshatha are sentient energy beings made mostly of ectoplasm. They dwell in forest regions and stake out a region that they protect. It is unknown what they eat, if anything. It appears that they do have a mouth slit, but they do not seem to speak or use it to eat. It is theorized that they may in fact be the ghosts of some unknown race that perished in the cataclysm. They take half damage from physical attacks, but full damage from energy-based attacks.

Eye of Death: This attack can be used up to 1/day. Those hit with the attack must make a CHA save or be killed instantly.

Entangle: The Ashshatha can use the Druid spell Entangle 1/day as a 10th level Druid

Invisibility: The Ashshatha can use Invisibility 2/day as a 10th level Wizard

Telepathy: Ashshatha communicate between themselves and other creatures by use of telepathy.

Posted by Greg Johnston at 7:56 PM