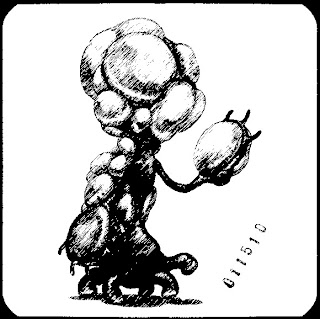 This mutated fungus is man-sized and is mobile. It is covered with 4-16 bulbous pods that release toxic spores when pierced. Any attack made against a Bothoth by a piercing or slashing weapon has a 70% chance of releasing spores. Blunt weapons only have a 20% chance of releasing spores, but such attacks do no harm to the Bothoth itself. The Bothoth can rupture the pods and therefore eject the spores at will. The Bothoth secretes a poisonous sap (Intensity 8 Poison) that will affect all that make physical contact with it that does not wear protective clothing. Bothoths live within or near the many Pod forests of Xhuul.

Spores: 4-16 pods that can release spores upon being hit with weapons or released by the Bothoth at will. The spores do 1d8 points of damage and burrow into flesh and take root. Make a CON save or succumb to a disease that prevents healing of damage until cured.

New Sense (Life Force): The Bothoth can detect living creatures within 100'. They sense the shape and location of their targets via energy emissions from the skin surface.