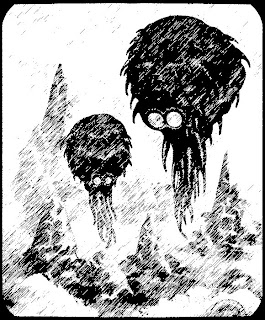 HOLOGUA
NO. ENCOUNTERED: 1-2
SIZE: Large
HD: 10 (d8)
MOVE: 60ft fly (hover)
AC: 13
ATTACKS: 4 Tentacles (1d10), Bite (2d8)
SPECIAL: Grab, Twilight Vision
SAVES: P
INT: Low
ALIGNMENT: Neutral
TYPE: Abberation
TREASURE: None
XP: 1650 +10/hp
These creatures look like 6-meter diameter floating jelly-fish, with large pupil-less eyes, and dangling tentacles beneath. The Hologua float by way of an internal gas bag which is filled with a lighter-than-air gas. They propel themselves by drawing in air and expelling it, much like a squid does in water. The Hologua dwell in mountainous regions where they float among the updrafts. When hungry, they grab prey with their tentacles and draw it up to their fanged mouths which then try to devour their meal. Their large eyes give them good distance vision and they are able to spot prey from 2 kilometers away.
When attacking with their tentacles, if two or more hit the same target, the target must make a successful STR save or be held immobile in the Holoqua's tentacles. The the following round, and any round the victim remains held, the Hologua will draw the target up to it's fanged mouth where it will have a +4 to hit with its bite.