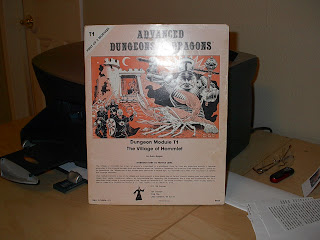 I again have The Village of Hommlet module in my possession. I got it off Ebay for around $14.00, including shipping. I used to own this module plus a ton of others, such as the original monochrome cover G-series, D-series, S-series and others. There came a time in my gaming life, around the early 1990's where level-based systems just weren't doing it for me anymore and I threw out alot of my AD&D stuff, thinking I would never play this game again. Boy, was I really stupid. I can only plead temporary insanity.

In my recent posts about using the really nice full color Moathouse map I found online for my 4E game, I found something interesting. I compared the color map against the map in the Return to the Temple of Elemental Evil (refereed to as RtTOEE hereafter) module for 3rd Edition, as I have a PDF copy of it. I did own the module for RtTOEE, but I lent it to a friend and I haven't seen it in years. The map in RtTOEE is the same layout as in Village of Hommlet. I noticed a few differences between the maps of the dungeon level. It made me wonder why would one go to all the trouble to make a nice, detailed color map of the Moathouse dungeon level and not stick to the original layout from the Village of Hommlet module?

I could understand not wanting to map out the ghoul warren tunnels and having it be collapsed on the color map is just fine. But some of the passages and rooms are very different. Just seems odd to me. Anyway, I had a need to want the original module just for purity's sake and for my small collection of D&D nostalgia.

Below are images of the color map and the Village of Hommlet map for comparison. 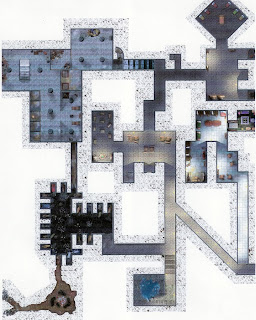 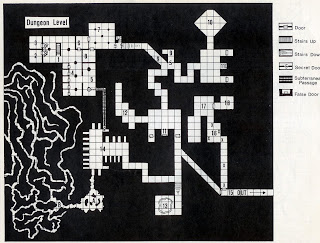 Posted by Greg Johnston at 6:09 PM