So, this past Thursday, my game group's 4th Edition characters journeyed to the infamous Moathouse which I was finally able to print out for my newly revived D&D 4th edition campaign. I covered the map with some large pieces of black construction paper to keep those areas they had not seen or explored out of sight. As the players moved their minis into new areas, the pieces were moved and rearranged. I really dig all the cool details on the map and I think it helps immerse the players into the game.

In my game, the Moathouse is a ruin which lies within a swampy region known as the Witchlight Fens which is part of the default setting in 4th Edition's Nentir Vale. The characters found out that a witch lives there who seems to be organizing several local humanoids into attacking the civilized regions of the Vale. Also, she is responsible for hiring an assassin that murdered a mentor of one of the PC's. Some characters have uncovered the 'cult of Elemental Eye' and another character a 'cult of the Elder Elemental Eye'. They are unsure if these are related, but they do believe it has something to do with the worship of elemental entities. Since the new cosmology in 4th Edition has combined the separate elemental planes into one Elemental Chaos (with the Abyss in it's center), now more than ever, the concept of Elemental Evil seems to fit. I wonder if the designers of 4th Edition did this on purpose with this in mind?

I was inspired to borrow from a RPGA adventure written by Mike Mearls called "Return to the Moathouse" for the first encounter. The first encounter at the gate and bridge to the Moathouse were guarded by 4 Giant Frogs in the moat's mucky water. These frogs were trained by local Bullywugs that live in the area, allied to the cult, to attack any not wearing the black tunics bearing the flaming eye symbol of the cult. There were two 2 Burning Skeletons in the tower that climbed the steps to the top of the tower after 2 rounds when hearing the battle with the frogs. The flaming skeletons rained down orbs of fire at the characters, and it was decided that someone needed to get into the tower to deal with them. The Paladin and the Cleric managed to get into the courtyard and into the tower, however this drew the attention of a magical construct known as an Arcane Ballista in the moathouse's courtyard which promptly attacked by firing bolts of lightning at them. The Paladin and the Cleric took a hit from a Ballista and ascended the tower. The Cleric used his power to Turn Undead and both Blazing skeletons fled off the tower, falling the 20 feet into the moat below and shattered into bones and ash. The Ballista meanwhile began firing into the tower, which was not very sturdy, hoping to bring it crashing down with the characters inside it. The Paladin and the Cleric made a mad dash outside the moathouse. The group was already battered from fighting the frogs and skeletons so they retreated to rest. The Arcane Ballista took several parting shots at them from the shattered gate until they were out of range. The Ballista returned to the courtyard. 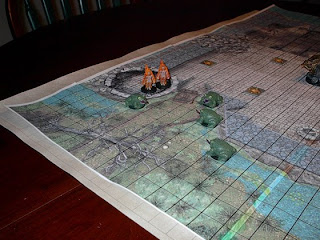 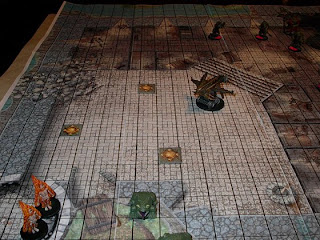 The characters decided they did not want to deal with the Arcane Ballista, so they returned this time and crossed the moat to the other ruined wall and tower to the east of the courtyard. They clambered up the pile of stones and rubble and into a ruined room. They failed to notice anything unusual about the water on the floor, until it was too late and it formed up into a Water Elemental and attacked. It flowed past several characters and blasted a few at the rear with a blast of water that sent many tumbling down the rubble. It then flowed back into the room and engulfed the Paladin in it's watery body and carried him along down the hallway that exited the room. The characters gave chase, a few had to struggle back up the rubble into the moathouse. The Paladin was slowing drowning in the body of the Water elemental, so it was dire that he be freed. The elemental fled into the main hall of the moathouse, carrying the Paladin with it. The main hall was occupied with Bullywugs. One of the Bullywug guards saw the characters down the hall and shouted a warning and battle had begun. It was fortunate for the Paladin, that the Wizard was able to cast a spell that affected the elemental by forcibly moving it without carrying the Paladin, who dropped to the floor, wet and gasping for air. The battle with the Bullywugs did not last as long as the one witht the Frogs and the Burning Skeletons, but the Arcane Ballista did make its reappearance, rolling up the steps to the main hall and firing lighting bolts through the door. Soon, all the Bullywugs were dead and the Arcane Ballista was smashed to pieces. 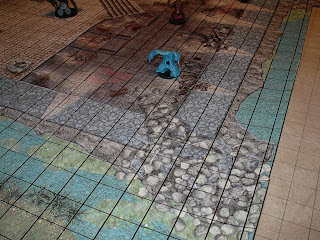 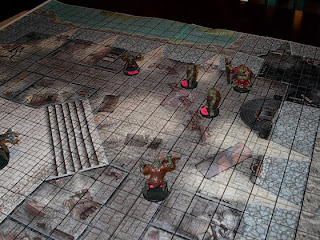 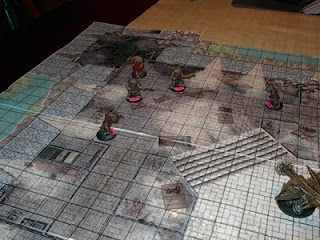 The characters searched the moathouse, finding mostly smashed furnishings and debris from some battle long ago that occurred here. Even though the witch lived here, it must not have been in the upper part of the ruins. They did find a set of stairs going downward....

The game will be continued, and I'm glad it ended when it did, for I did not have enough time to work on the dungeon level. It was a perfectly timed stopping point for the game.

Posted by Greg Johnston at 9:02 PM