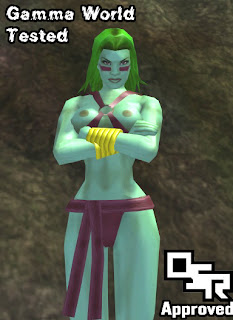 Ha! Fooled you. There are no elves in the Weirdlands of Xhuul. But we do have plenty of Pure Strain Human chicks and Mutant Human chicks that should be able to tickle your fancy.

So, what did you just stumble upon? This is a blog about role-playing games, in particular, Gamma World. Of course not your typical post-apocalyptic Gamma World setting, this takes place on a far off world called Xhuul. It is influenced by swords-and-sorcery and science-fantasy literature as well as "weird" fiction stories as those written by H.P. Lovecraft and Clark Ashton Smith.

Posted by Greg Johnston at 9:06 PM