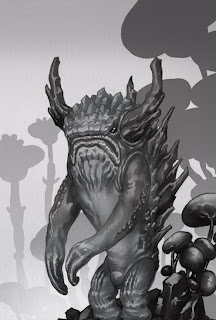 The Groort is an elemental creature with rock-like armored hide and great horns of jagged rock. These creatures feed on minerals, rock, crystals, precious metals and gems. They roam barren regions, deserts and mountains, and underground caverns. Their digestive system is rather slow to process the various minerals and metals they consume, only needing to feed once every 4 days. They are attracted to sources of magically-imbued metals or stone which they find to be a delicacy. When attacking, they gore their opponent with their horns and follow up with a bite from their large mouth. Their bite is dangerous as it can turn organic creatures into stone (which they then can consume for food).

Immune to Back-Stab: The Groort cannot be back-stabbed as it has a heavily armored hide of jagged rock on thier backs. Any attempt to back-stab will fail, but the weapon can do regular damage. Also any successful melee attack on their back side has a 4 in 10 chance that the attacker suffers 1d8 damage from the sharp jagged hide.

Petrification: The bite of a Groort can cause the target to turn into stone. Make a WIS save to avoid this.

Groorts which are killed are a great prize, as they may contain large quantities of gems and precious metals within their bodies which have not been digested. The treasure type is indicative of what may be within their bodies. Ignore any results from the treasure tables that would not make sense given what the Groort eats.

Posted by Greg Johnston at 3:13 PM