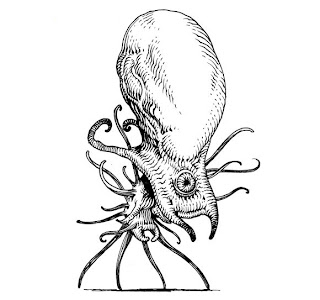 Alien creatures from another dimension, the Krthateli have raided into the lands of Xhuul looking for slaves. Their relative small bodies are dominated by an oversized head with a single cyclopean eye. Their bodie is supported by four tentacle-like legs. Their back and sides sprout numerous manipulator tentacles which they use to carry equipment and weapons.

Weapon (Stun Rod): The Krthateli are usually armed with a rod made of silvery metal. This rod fires a beam of cold, blue light that renders it's target unconcious. The target must make a CON save or fall unconcious for 1 hour.

Absorption (Cold): Can absorb cold damage equal to their HP total without subtracting from their actual hit points.

Illusion Generation: Can use 2/day. Can project illusions that have olfactory, visual amd audible components to any spot within sight range. Those seeing the illusion must make a WIS save or believe the illusion is real. The illusion lasts for 5 minutes.

Light Manipulation: Can use 2/day. Can make itself and everything they carry invisible. When power is in use, lasers and Black rays won't affect them. Attacking an invisible Krthateli suffers the usual penalty of -4 to hit. The Invisibility lasts for 4 minutes.

Fear Generation: Can Use 2/day. Can instill fear in one target within 90' range. Target must make a CHA save or flee in panic for the next 6 rounds. If target is unable to flee, it falls unconcious for 1d20 minutes.

Posted by Greg Johnston at 7:48 PM