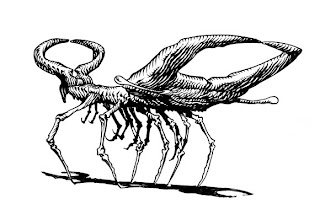 These man-sized insects are aggressive creatures that haunt forests and jungles, always in search of food. Their name comes from the large pincher above their head which looks like the man-catcher weapon used in some arenas. The pincher is used in the same way, to hold prey, crushing it, while repeated strikes with its tail pincher eventually kills their quarry. The Man-Catcher has eye-stalks which allow its eyes to look in any direction, thereby making it impossible to be suprised or attacked from behind.

Pincher Grab: When the Man-Catcher attacks, it's first action is to grab it's prey with it's head pinchers. A successful attack on its target does 2d6 damage and the target must make a successful save vs STR or be held immobile in it's pinchers. Each round thereafter, the pinchers squeeze like a vice doing 1d6 damage automatically. Each round, the target can try to make another save vs STR to break free.

Tail Pincher: A target held by the head Pincher, allows the tail pincher a +3 to hit that target.

Posted by Greg Johnston at 9:37 PM