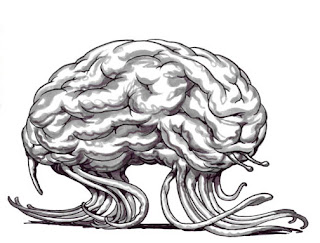 The Sibog appears as a small brain-like creature with tentacle-like appendages it uses for locomotion. The Sibog usually finds a place of hiding and waits for a potential new host. Upon the arrival of a new host, the Sibog uses Detect Thoughts to determine if it will be a suitable host. Upon finding one, it will attempt to climb upon or drop down on the host and its tentacles will wrap around the host's head, inserting some into the ear canals and burrowing into the host's brain. This will allow it to control the host and use the host's abilities for it's own purposes.


Once in control of a host, the Sibog will have access to all of the host's memories and abilities and essentially has the host's HD for purposes of attacks and AC. Meanwhile the Sibog is slowly draining the brain's fluids. Each day, it drains 1pt of INT from the host (INT Save to Resist). Drained INT cannot be restored unless through magic. Once INT is reduced to 0, the brain is a descicated husk and the host dies. The Sibog disengages from the host and seeks a new one.

Mind Blast: The Sibog can unleash a psychic attack that affects all targets in a 30' radius from it. A Save vs WIS or each target takes 3d6 damage and is stunned for one round. The Sibog can use this power 2/day

Control Host: When the Sibog makes physical contact with a target to be it's new host, it first makes a grab attack to securely latch itself to the host. On the following round it burrows its tendrils into the host's brain. This causes 1d8 damage. Then it attempts to take control of the host. A Save vs WIS is required or the Sibog gains control. Once in control, it will be able to use all attacks, spells and abilities the host has.

If a Sibog attached to a host is attacked, it gains the AC of the host. Given its relatively small size, there is a -2 to hit penalty. Damage to the Sibog does one half this damage to the host if it has gained control of the host. A Sibog (not its host) that is reduced to 0 hit points dies and the host is freed from control.

Posted by Greg Johnston at 7:27 PM