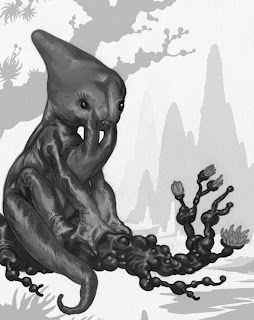 The Ayub is a small reptilian-like humanoid animal that lives in small groups throughout Xhuul. They dwell in trees and their diet consists of fruits, grubs, roots and vegetables. They are generally passive and will flee if approached. If cornered, they will defend themselves and will bite and scratch with thier teeth and claws. Ayubs can be a nuissance to local farms, where they usually eat crops if food is scarce. Ayubs are hunted as a food animal, and their meat is quite tasty when cooked.

Posted by Greg Johnston at 9:47 PM