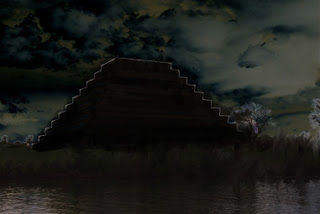 The Black Ziggurat is an immense multi-tiered structure made of a dark stone and crystal of apparent Ancient manufacture. It sits overlooking the city of Hlatl, which itself is built upon a rocky tor at the center of the Black Crater.

There are old tales that during the great cataclysm an Ancient weapon fired from the heavens, itent on destroying the Black Ziggurat. After the smoke had cleared, the Black Ziggurat stood unscathed. It sat upon a mountain of rock, while all around it a large crater was all that was left to testify of the weapon's power.

The Black Ziggurat is the palace of Hlatl's sole ruler, Kigloth the Mad. Not much is known of Kigloth, except he arrived some 300 years before the city's founding and probed the depths of the Ziggurat. When settlers arrived about 150 years ago, they encountered Kigloth who emerged from the Black Ziggurat and announced he was the ruler of the land. Those who challenged his authority were shrivelled into a black dust by the wave of his hand. This quickly suspended any doubts to his power and the settlers acknowledged his rulership.

The Black Ziggurat is rumored to be a nexus to many planes, where aspects of it's structure appear in other worlds. Its halls are a twisting maze of odd shapes and angles that would challenge any rational mind to stay sane. It holds some of the greatest mysteries and treasures beyond imagining. There are very few, if any visitors to the Black Ziggurat. Foreign dignitaries are usually met outside the structure by either Kigloth himself (rarely), or his appointed representatives and usually are provided luxurious accomodations in some of the outlying buildings on the palace grounds.

Posted by Greg Johnston at 9:04 PM