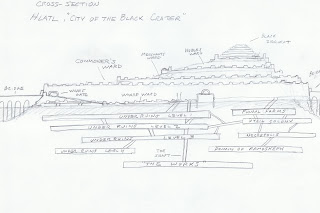 Here is a cross-sectional map of Hlatl, City of the Black Crater. The city is divided into various wards which are separated by inner walls. Generally, people residing in each ward closer to the Black Ziggurat are wealthier. The Wharf Ward is is the 'Mos Eisley' of the city where the real scum hang out. You can still find scum in the Commoner's Ward, but the beggars, thieves and other dregs who can't afford to live in the Commoner's ward live in the Wharf Ward.

The city was built up over previous ruins, which were used over time on the level above it as storage areas, sewage tunnels, etc., These under-ruins have been abandoned over several years as strange mutants and undead beings have been making lairs here. The old storage areas left behind have spawned rumors of great wealth and treasures to be found.

There is a central shaft that leads down from the Merchant's Ward to a level deep below the city known as 'The Works'. Here are located the foundries which process ores and other materials into goods that are then sent up on massive lifts to the Merchant Ward and into the markets. It is also the location of the sewage treatment machinery. It is home to other industries such as tanneries, slaughterhouses and other unpleasant smelling trades. The Works are a dark and smoke-filled region, honeycombed with passages that are soot-covered and rumble with the noise of the various industries. The passages are lit with Fire Beetle glands in glass lanterns spaced far enough to provide dim light throughout. There are dark stretches of tunnels which are unlit as well which are dangerous from some of the ruffians who have made their way down from the Wharf Wards to find work or waylay workers.

The Fungal Farms provide the city with a rich variety of edible fungus which serves are a staple diet for most citizens, much like how rice is a staple food in most Asian countries. The Fungal Farms are attended by the Xycil which serve as the city's civil servant class. The Xycil are also responsible for keeping the tunnels and passages beneath the city clear of rubble and garbage, which they usually remove to their colony or the Fungal farms to be placed in the compost pits.

The Xycil Colony is made up of tunnels lined with a self-secreted resin the Xycil produce and well as webbing which reinforce the passages making very stable and easily to crawl along. Here are located the egg chambers and the Xycil Queen.

Below the Xycil Colony is the Necropolis which is where bodies are interred for burial. The city above doesn't have enough space for graveyards and burial grounds, so all the city's dead are placed here. The Xycil carry the dead here and place them in burial niches, wrapped in webbing. The Xycil do not eat flesh so they would not be tempted to use any dead bodies for food. The proximity of the Domain of Ramoskeph is no accident and the necromancer frequently sends raiding parties of undead servants to the Necropolis for freash bodies to conduct his expirements.

The Domain of Ramoskeph is the most dangerous place in all of Hlatl's underworld. The area is a maze of tunnels and chambers, roaming with undead horrors and other vile vat-created homonculi. There are deadly traps scattered about. Ramoskeph is powerful sorcerer of necromantic might and is the provider of the city's supply of Grey Men. He is wealthy and a recluse, always pre-occupied with his researches, and his moments of sanity and clarity are rare.

Posted by Greg Johnston at 6:57 PM