I was reading through an issue of Dungeon magazine (#113) and there is a low-level adventure called "Queen with Burning Eyes". I read through the adventure and thought it would make a good introductory dungeon crawl. The map for the adventure was horrible however, as they used "tiles" form the D&D Miniatures Entry Packs and overlapped them. I thought the general layout was good, just the execution of using the tiles was poor.

So I used Inkwell Ideas Dungeonographer and made a new version of the map and did some refining in Photoshop. I goofed by adding some stone texture along the outside of the dungeon perimeter, when I realized how printer unfriendly that would be, I had to spend some time cutting that out. You'll note the "hanging chads" of the grids where this occurred.

I'm going to adapt this as a starting adventure below the city of Hlatl deep within The Works level. 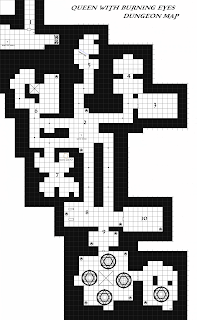 Posted by Greg Johnston at 3:06 PM