Welcome to the Honeycomb Hideout 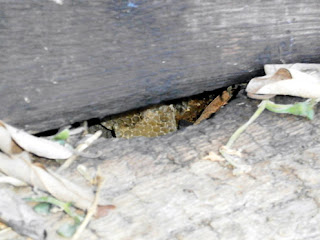 About a month ago there was a bee swarm in my backyard. Looking out my bedroom window, I noticed a large clump of bees hanging from a small tree that grows along the side of the house. Thinking that it was a hive, I called a Bee Removal company and the man I spoke with said that they would most likely move on within 72 hours after the scouts found a place to build a nest. The clump I saw was actually just a bunch of bees surrounding the queen. Sure enough, I looked out the window a few hours later and all the bees were gone.

A week later, my gardener left me a note on his bill saying there are alot of bees in the back yard. So I went out to the spot he indicated and noticed alot of bee activity at the back of the yard where alot of ice plant was grown over some railroad ties that forms a retaining wall. I guessed that the bees might have made a nest behind the railroad ties, but didn't want to risk getting myself stung just to confirm it.

I had some work that needed to get done in the back yard and a active bee's nest was going to prove a problem. So I called a company to come and check it out. Sure enough there was a nest there. The technician sprayed the area and we made arrangements to get the nest removed, which will be next week. This isn't a cheap service and now I hate bees with the fury of a thousand burning suns!

Posted by Greg Johnston at 7:31 PM

Email ThisBlogThis!Share to TwitterShare to FacebookShare to Pinterest
Labels: bees