I downloaded Mystery Men!, a free superhero RPG over at Land of Nod. I read a review of the game over here and decided to give it a read. This is a nice, rules-light style of game and is very familiar with regards to stats (D&D anyone?). You can run any style or power-level of super-heroics. It lacks the super customability of Champions, but given the complex nature of that game and the utter crawl of combat, I find that Mystery Men! will perform better. I do get the sense that it will require a bit more imagination and adjudication from the GM's (err...Master Mind's) part, but isn't that the spirit of old school gaming? Rulings and not Rules?

I made a character based on my character I play in the Online game City of Heroes, a Fiery Aura/Super Strength Tanker. I used the superheroic range of starting points (50,000) to build my hero. This is only a close approximation as it would be way expensive to create every power my character has in the online game. 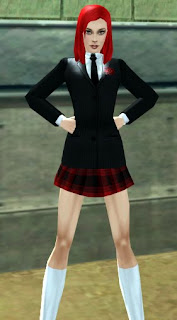 Background:Candice (Candie) O'Shea was born into a wealthy family of Irish ancestry. Her father is an inventor and engineer of a revolutionary source of power that is basically a miniature sun. During a test, the electromagnetic fields that kept the superheated ball of plasma contained experienced a malfunction and began to destabilize. Candie was present during the test. As the EM field collapsed, Candie's dormant mutant genes imprinted themselves on the forces unleashed. Candie asborbed the rapidly expanding fireball into her body. Another side effect of her mutant powers was increased super strength, presumably due to the gravitic forces also unleashed. Candie was sent away to a special school to help deal with her powers. This is the Nukem High School for Girls. In the meantime, Candie does her homework, talks about boys, learns more about her new powers, fights crime, talks about boys, does makeovers, goes to the mall, and talks about boys.

Posted by Greg Johnston at 8:07 PM