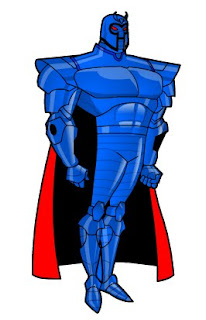 BACKGROUND:
During World War II, Dr. Wolfgang Mentz was recruited by the Nazis to work on special weapons. He helped develop the V2 rocket and other jet-propelled aircraft. He regarded the other scientists as inferior to his own intellect. Resentful of his arrogance and condescending manner, the other scientists managed to lock Dr. Mentz in a lab and set a fire among the barrels of volatile jet fuel. The building exploded and it was believed that Dr. Mentz had perished.

Dr. Mentz had managed to escape, but not before suffering severe burns over most of his body. Fortunately for him, there was a canal nearby that he dove into to extinguish the flames. Burned and crippled, Dr. Mentz was no longer the image of Aryan perfection, and so he went into secret exile underground to conduct his own research and expirements. Many years had passed, but soon he emerged in South America, this time in a suit of powered armor which hid his grotesque appearance and provided the means to survive his injuries. The armor had greatly enhanced his physical abilities and provided protection from mundane weapons. It could project beams of energy from his gauntlets. He quickly took over a small country in South America and began his plans for world domination as Dr. Destruction.