Sorry for the extreme lack of posts recently, I've been busy with projects around the household and the utter shear lack of anything to write about. Until now.

The other night I watched a direct-to-DVD movie entitled 'The Burrowers'. 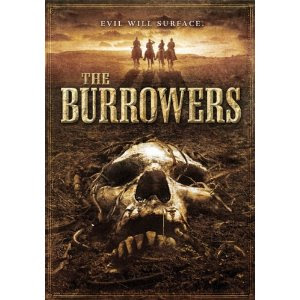 Basically its a western with monsters. The movie kind of drags throughout, but starts to pick up more than mid-way. The only notable actor in it is Clancy Brown. I won't spoil the movie for you, in case any of you want to watch it., I thought I would write up monster stats for The Burrower creatures, which look like a cross between a human and a cricket. 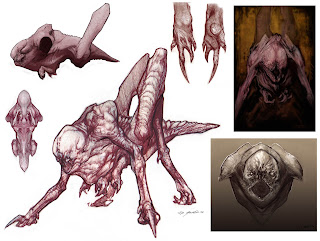 The Burrowers are nocturnal creatures that emerge from the earth to hunt prey. They attack as a group to subdue their prey. They do not try to kill their prey outright, seeking instead to paralyze them and then burying their prey until it rots and then returning later to feed.

If they manage to do damage with a claw attack, they will try to follow up with venomous discharge from their mouth into the claw wound which will paralyze their prey and cauterize the wound. Once immobilized, the Burrowers drag their prey away, dig a shallow hole and bury their food for later consumption. The venom begins a slow rotting process that leaves the victim alive until the burrowers return to consume the victim.

If the prey manages to escape without being paralyzed by the venom, the slow rotting effect begins (treat as a disease) which allows the Burrowers to track thier quarry for later capture.

The Burrowers can be harmed by any kind of attack. They do feel pain and can be driven off, but they cannot be killed. They will always effectively have 1 HP, unless directly exposed to sunlight which will kill them immediately.