Flipping through my 2nd Edition Gamma World book, its interesting how some creatures/mutants in the GW book are roughly analogs of D&D Monsters.

Admittedly, this list isn't very long, but it's pretty obvious that they have their origins in the Monster Manual(s). 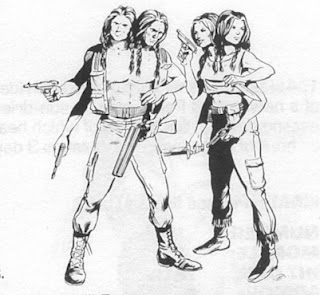 The picture to the right is the Orlens, as drawn I believe by Jeff Easley in the 2nd edition GW book. They look like Native Americans, with two-heads and two sets of arms. I would re-envision them as something more twisted. Not all would look like the perfectly functional, handsome couple of Apache Chief and his Squaw as seen in this picture.

It would be something more like these inspirational images from HERE