I made a map of the remnants of a ancient domed city which would serve as a basis of a hex-crawl through the city itself. I haven't settled on a name for the setting, but for now I am calling it Xoghul. The full name of a campaign set here would be called 'Xoghul: Adventures Beneath the Shattered Dome'. 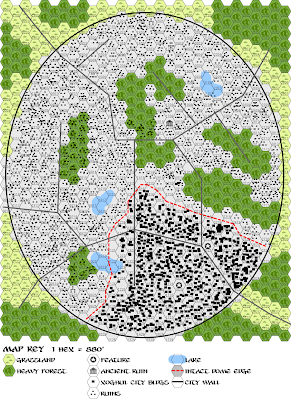 The map is inspired by posts from the now defunct World of Thool blog and the cover of the 1st Edition Gamma World box set. The focus of the campaign would be the exploration of the ruins, and the method to drive that exploration is a different spin on the hex-crawl. Xoghul is the name of the settled part of the ruins, under the rule by some powerful Autocrat. Xoghul lies beneath the intact portion of the dome, which shields it from some of the elements, the rest of the city is in ruins, as a result of when the dome shattered and rained debris down upon it ages ago. The original name of this ancient city is lost to time. Some sections of the city have been reclaimed by wilderness (aka Forest hexes), which cover ruins underneath.

I'm still thinking about what to place within the city, factions, NPCs, places of interest, etc., I may just make it a setting for a short-term campaign whether for C&C, using my Xhuul setting or an alternate Gamma World setting.

Based on the scale of the hexes of 880 feet, the city is roughly a 5 mile diameter area.

Posted by Greg Johnston at 8:45 PM