Over the holidays I purchased the PDF version of James Raggi's The Random Esoteric Creature Generator published by Goodman Games. I rolled up a creature and made a few tweaks and so I present to you, the Doarg, a predator of the forested regions of Xhuul. 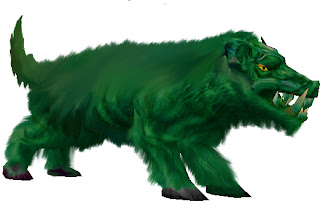 The Doarg is a predator that shares characteristics of a boar and wolf. It is a large creature standing at a height of 20ft at the head. The Doarg is covered in a thick coat of green fur that helps it to blend into it's environment when hunting. The Doarg is aggressive and will attack any creature it encounters due to it's voracious hunger. In combat, it will attack the foe that does it the most damage to it earlier in the same round or in the prior round.

Posted by Greg Johnston at 8:14 PM