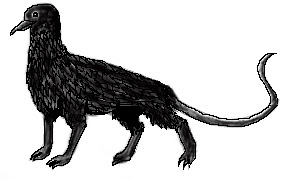 Navoors are large creatures standing at 8ft tall. They have a bird-like head and a body covered in black feathers. Their four legs are bird-like talons. They have a long black whip-like tail.

Navoors attack with their sharp beak, doing 1d10 piercing damage. They can also make a secondary attack at either the same target or another target with their long whip-like tail for 1d8 slashing damage.

Navoors have a rubber-like bone structure which absorbs hard impacts, and as such, they do not suffer any damage from blunt weapon attacks.

Navoors have a keen sense of their opponents health and will focus their attacks on creatures with the most remaining hit points.

Any creatures killed by a Navoor will be infected by a mutagenic parasite that will transform the dead creature into another Navoor within 24 hours. Navoors act as hosts for the parasite and this is the only way more Navoors can be created.