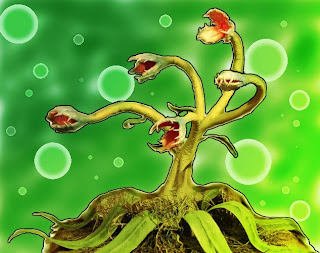 U'zaug is a foul creation of the strange energies unleashed during the war between the gods that ravaged Xhuul. It is a large plant creature with a mobile root system that enables it to walk with incredible speed. It has 5 long stalks that each end in a venus-fly-trap type mouth. The plant is a sickly yellow-green color.

When attacking it slams into its prey with one of its stalks, doing 1d10 bludgeoning damage. The mouths at the end of the stalk do no damage themselves and function much like a venus fly-trap, secreting a slow digestive acid that breaks down its prey and absorbs it.

SPORE SPRAY: Once per round, U'zaug can emit a spore spray that drains 1d6 CON. The spore spray fires out in in 45 degree cone with a range of 70'. There is no save vs this effect. CON will return at 1pt/hour for those who survive the encounter.

CAMOUFLAGE: When U'zaug is immobile, it changes its color to blend into the background. This allows a +2 to suprise foes.

SPELL REFLECTION: U'zaug will reflect all spells of 4th Level or lower back upon the caster.

PARTIAL LIGHTNING IMMUNITY: Assuming any lightning attack that is not a 4th level or lower spell (which would be reflected back to the caster), U'zaug will take 1/2 damage from a failed save or no damage on a successful save against lightning attacks.

DEAFNESS RAY: This is a ranged touch-attack. If the target fails it's DEX save, it will be rendered deaf for 6 Turns (1 hour).

TREMORSENSE: U'zaug has no eyes, it feels the presence of other creatures up to 60ft away who travel on any surface. It cannot sense flying creatures.

Posted by Greg Johnston at 1:23 PM