Map of Nerath: The setting D&D 5E should focus on.

When 4E came out, there was a "Points of Light" style world in the back of the DM's Guide which was set in a place called the Nentir Vale. This location was the focus of many of 4E's early adventure modules (i.e. Keep on the Shadowfell, Thunderspire Labyrinth, Hammerfast, Trollhaunt Warrens etc.,). The Nentir Vale was detailed just enough to give you a sense of the place and there was room for any DM to develop it further.

I liked the setting and ran a short-lived campaign there using 4th edition before I just got sick of all the rules errata horse-shit and the switch by WoTC to their On-line Character Builder. I cancelled my DDI account and abandoned 4E shortly after in favor of Castles and Crusades.

With the release of the "Dungeon Master's Kit" by WoTC, there were more details included about the small Barony of Harkenwold in the southeast corner of the Nentir Vale. A few adventures were included in the Kit set in the Barony, focused on an invasion by an evil group of marauders known as the Iron Circle. The PCs were to help organize a resistance group and seek out allies and resources to fight against the invaders.

With the release of the board-game "Conquest of Nerath" by WoTC, it shows what the rest of the world looks like. And it's a pretty sweet map. Now that we have a better picture of what that world looks like, this should be the setting that D&D 5E (or D&D Next) should set the game on. I got the impression that WoTC was going to support the Forgotten Realms with this new edition.

I say that's a mistake. Why? Because they nuked the Forgotten Realms the last time they released a new edition of the game in order to shoe-horn an explanation of why the game mechanics were different from the previous edition. That was just dumb and it left a lot of FR fans angry.

You can't disappoint fans of a beloved existing setting if you launch a new one with the release of a new edition of the game. Just think of all the setting splat-books you can publish for the new world....

Below is a map of the board-game "Conquest of Nerath" 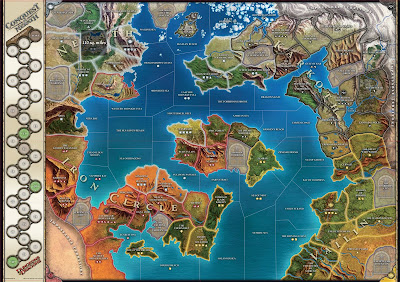 I've added a shaded square to the map in the upper left portion of the map which represents a 110 square mile area. This was figured by eye-balling the map and comparing the scale shown of the Nentir Vale in the 4E DM's Guide. So, this should give you a sense of scale.

I'm not really interested in the new edition of D&D. I did like the Nentir Vale setting and I'm just thinking out loud that they should develop it more for the new game. But going back to the well which is Forgotten Realms? The well that WoTC poisoned? That's just dumb.

Posted by Greg Johnston at 7:03 PM