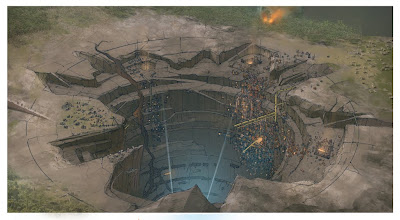 Table-top role-playing is a shrinking hobby year-after-year. The competition from online computer games, such as World of Warcraft and others is what today's generation of gamers think of as "role-playing" and is vying for their time and money. And you can't really blame them. It's much easier to sit in the comfort of your own home and log-in to a shared world through your home computer which is colorfully laid out before your eyes and connect with other players. No dice, no battle-mats, no waiting for the always-late players. And today's games are rich in their graphical detail and can tell a compelling or interesting story. Such games can serve as an inspiration for your table-top games.

One recent find I stumbled upon a couple of days ago through Steam is a game called Krater. It is set in a post-apocalyptic Sweden where the setting is a large crater-like geologic depression where factions vie for control of subterranean tunnels and complexes with technological treasures and things best left undisturbed. Sound a little bit like Gamma World?

The trailers for the game are interesting and show what this world is like. It looks like there is definitely something in the air that is still harmful, as many of the people wear gas-masks and other similar protective gear. Is it harmful bacteria or poisonous gases? Unknown. It would be interesting to get a hold of the in-game world lore for an explanation.

Another interesting story regards the soundtrack for the game. I've listened to a couple of pieces online and it is very good. There is also some cool concept art. Check it out.

Posted by Greg Johnston at 5:13 PM