We had our second game this afternoon.  We were joined by our 3rd player who had to leave early last game during character creation due to a real-life commitment.

The party is as follows:

We came up with a reason why the Cleric wasn't in the first game session, as he was being briefed at the temple of his god, Gorum of the presence of  Urgathoa worshippers somewhere within the Barrowmaze.  He has been charged to investigate and see if they pose a threat to the city of Magnimar.  The Cleric was aware of the quest they took at the Pathfinder Society Lodge to find a missing member who went into Barrowmaze.

They party backtracked through some areas they went past (marked in yellow) and I told them that several of the doors they went through were closed.  This got them a bit worried, but little did they know that I am using the old school rule that all doors close after about a minute.  I have also determined that all the doors in Barrowmaze open outward into the halls, so as to discourage camping in the dungeon (as they can't spike doors shut).  This will allow me to roll for dungeon restocking.

The areas marked in Purple are the areas they explored or could see from their darkvision/light-source range during today's game. 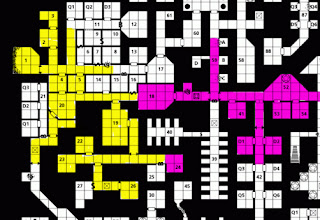 They managed to kill a Gray Ooze (which was the longest fight in the game due to it having 50 HP), 7 Giant Carnivorous Flies, 2 Huecuva (the room said there was 6, but I toned it down since they had Damage Reduction of 5), and 4 Ghouls.

The party did search the burial alcoves in several rooms, which they had skipped doing in the first game and found much more treasure.  But with the extended amount of time doing so I made several wandering monster checks, but none showed up.  The magic items they found were a Potion of Hold Portal, a Bag of Holding and Gloves of Swimming and Climbing.  The coins and gems they found will put them on target for the amount of wealth they should have at 2nd Level, according to Pathfinder.

At the end of the evening, the party debated as to whether or not to camp and rest in Barrowmaze.  When they found out all doors swung outwards and there was no way to secure themselves, they decided to head back to Magnimar and rest and divide up their treasure.

It will be fun to see if any of the rooms get new occupants.

Posted by Greg Johnston at 9:32 PM