I DM'd my first Pathfinder game tonight with some friends.  They made characters and one of my friends had to bail early because of a prior commitment, so that left me with two PC's.  I ran them through Barrowmaze.  The premise was that they are looking for a missing Pathfinder Society explorer who went to the barrow mounds and hadn't returned in 2 weeks.  They were hired to find him.

I'm using stats in Barrowmaze as is.  I'm not going to bother doing any conversions.  For Armor Class I just take 20 and subtract the number in the book.  The monster's Hit Dice I use as their To hit bonus.  I use the damage as presented in the book.

They encountered one Sapphire Skeleton as a wandering monster.  They "killed" it, but noticed the bones were assembling back together, so they grabbed the skull with the gem in it and kept it from fully assembling.  They managed to pry the gem loose, but since they did not destroy it, the bones of the skeleton's body kept knitting back and following them.  They decided to move away from the bones and went into a room and closed the door.  That was when a stone wall dropped from the ceiling and sealed them in.  A door on the opposite side of the room opened and 7 skeletons emerged.

I thought they were doomed being outnumbered 3 to 1.  But some really bad to hit rolls on my part worked in their favor.  The player playing the Monk was kicking some ass and was more effective in combat than the Barbarian.  After they defeated the skeletons, I ruled that the stone wall eventually reset itself.  When they opened the door to exit, the Sapphire Skeleton's body was assembled sans skull and attacked them as it waited for them outside.  They managed to "kill" it again and tossed the bones into the room they left and closed the door.  They still have the intact gem.

They encountered a room with 11 Giant Rats and promptly closed the door, deciding not fight them.

They explored some other rooms, which were empty.  One of them fell into a covered pit trap and they decided to go back, thinking they person they were looking for hadn't gone the way they were headed.
They found two rooms with burial niches, but didn't want to waste time looking through them.  They narrowly avoided a Poltergeist encounter by not entering the room.

Below is the map area they travelled and explored (marked in yellow).  I kept a rough track of time, but wasn't successful  at rolling any further Wandering Monsters. 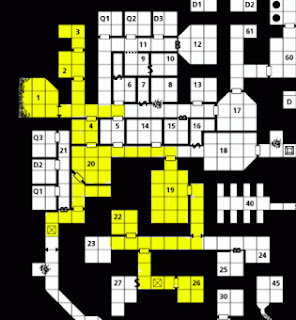 Posted by Greg Johnston at 9:54 PM