We played our 3rd session of Pathfinder Barrowmaze yesterday afternoon.  The party spent some of their treasure from the first two game sessions on masterwork armor and weapons and some more potions of Cure Light Wounds.  The party decided to go in a different direction covering the areas marked in green on the map below.  There weren't many combat encounters this session, and the few that they did have were relatively easy. 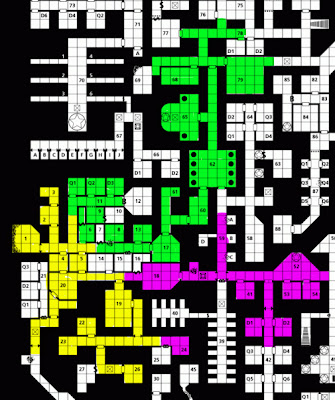 The players finally gave me the names of their characters.  We have Boyd, the half-elf Barbarian, Vermithrax the half-orc Cleric of Gorum and Zaid (pronounced Zai-eed) the human Monk.


Highlights of the game include:
They were unable to lift the portcullis at Room 9

Boyd the Barbarian ran away like a sissy girl from a Phantom after failing his Will save from it's fear attack.

Zaid making note of dungeon graffiti of someone named Lucius who claimed to have screwed a barmaid at the Brazen Strumpet.

Vermithrax almost going amnesiac from a Runic Tablet, but he made his Will save.  Lucky bastard.

Boyd triggered a crossbow arrow trap and was nicely rewarded with a bolt to the chest.

The party heard a tapping noise somewhere in the dungeon and thinking it was the Halfling they were sent to go find, decided not to go listening at doors and just brazenly open them, despite that this happened after Boyd triggered the crossbow trap.

They found a temple to Urgathoa with a statue of one of the deity's servants in a seemingly beckoning stance.  Vermithrax detected magic and felt overwhelmingly powerful aura of transformation magic and divination magic.  With that they decided that the statue would animate if they entered the room and so they left.  They never entered the room, so they missed finding the injured dwarf at the bottom of a pit in front of the statue.

They found a large chamber with 8 tomb-robbers who were resting and didn't like the intrusion, they told the party that this was their "territory" and that the party should look elsewhere for treasure.  The party left the room.

Boyd and Vermithrax were searching a room with burial alcoves, leaving Zaid to stand watch.  A wandering group of 11 Tomb Robbers came upon the room and decided to attack the party.  This was an easy fight and one of the tomb robbers tried to run away, but Boyd ran him down and slayed him with his great axe.

The party managed to find gold and gemstones and decided to head back to the city of Magnimar to rest up and recuperate from their lost CON points.  This will now allow me to roll for dungeoon restocking.  I was able to roll restocking in some of the rooms they explored in Game 2, but since they went in a different direction, they missed those areas.

It looks like our next game session will be on December 22nd.  Good times.