Last night we had our 4th session of our Pathfinder game delving once again into the damp, quiet crypts of Barrowmaze.  We were supposed to play last week-end, but last minute cancellations from 2 of the 3 players was a bit disappointing, but understandable considering how close that week-end was to Christmas.

I still haven't had any luck finding a fourth player, but for now we are getting by with the 3 players.  The players have been quite capable at dealing large amounts of damage in combat, even at 2nd level, between the Boyd the Barbarian and Vermithrax the Cleric, they on average deal around 10 to 16 points of damage.  If the Barbarian rages, that damage goes up to 20.  This has made most combats short and brutal for the monsters.  So to make it a little more challenging, I decided not to use the average hit points for monsters as shown in the Bestiary and go with maximum hit points for all monsters.

At the end of the last session, the party returned to the City of Magnimar to rest up as Boyd and Zaid were bitten by the Giant Rattler Snake and lost CON points.  With good Heal Skill checks from Vermithrax, he managed to concoct a salve and managed to counter the effects of the poison, though his companions would still need a full day of bed rest.

Before setting out once more for another sortie into Barrowmaze, Boyd was concerned that the other groups of men they had encountered plundering the crypts might make off with their rope that they use to descend into Barrowmaze, thus trapping them inside.  They pooled their hard-won gold and decided to purchase a Rope of Climbing.  I rolled to determine if such an item could be found, and luckily they did.  Magnimar is a large city and there was a very good chance of this, based on it's stat block.  The rope would also make it easier to cross any pits they might encounter by climbing to the bottom and then up the other side (as long as it is not more than 60 feet deep).

The map below shows the new areas explored this session colored in Orange.  Room 18 was an empty room they previously searched and mapped in Game 2, but was restocked by 2 Ghouls, that hid in the darkness and leaped out to attack the party.  Zaid the Monk was Paralyzed for a few rounds, but Boyd and Vermithrax were able to dispatch the 2 Ghouls in short order. 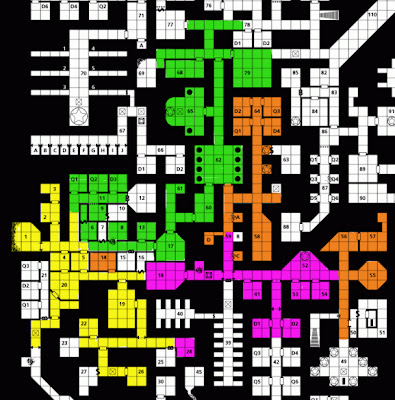 The biggest battle of the night was in room 58.  The room was empty of monsters but did contain the head of a statue and around 150 burial niches that Boyd and Zaid decided to search.  This would take an hour to do so, while Vermithrax stood guard since he has darkvision.  After 20 minutes of searching, I rolled a wandering monster: 2 Skeletons.  That wasn't the tough battle, and they easily took out the skeletons.  But the next wandering monster check was after they had finished searching.  This turned out to be 6 Sapphire Skeletons.  The look of horror on the 2 players who had encountered only 1 of these during the first game session was priceless.  Sapphire Skeletons have green gems embedded in their skulls, which glow during combat.  The fact that these skeletons fully reassemble with full hit points after 2 rounds of being defeated put the pressure on the party.  In their previous encounter, the players never tried to destroy the gem in the skull (which is the source of its regenerating properties), they pried to loose from the skull, fearing that smashing the gem would make it valueless.  Their greed over-rode reason in this case.

The party couldn't escape as the Sapphire Skeletons blocked the way out of the room.  Boyd and Zaid knew from previous experience that the bones reform and try to reconnect to the skull, and following whoever is holding the skull.  Vermithrax decided to grab two skulls and run down the corridors to pit near room 18 and throw the skulls to the bottom, he had a 2 round head start and so he managed to out-run the skeletal bodies that chased after him.  They ran passed him to rejoin with their skulls by jumping into the pit.  This will make it interesting when they decide to leave Barrowmaze, as they will need to cross this pit to exit.

Meanwhile, Boyd came up with an idea that I thought was very clever.  They found a Bag of Holding during a previous game and decided to toss the four skulls into it.  Since it is an extra-dimensional space, the magic would be cut-off from the Prime Material plane, so the bones stopped moving and did not reassemble.  Boyd later removed one skull from the Bag of Holding after the battle to smash it with his great axe, thus destroying the gem and witnessing that the bones then stopped reassembling.

The party encountered the Crystal Statues outside Room 63.  The statues turned their heads to watch the party as they approached.  The party, being cautious, tried asking the statues questions, but received only stony silence.  Zaid threw his bedroll over the head of one of the statues, it promptly removed it and resumed it's position.  Fearing they would attack if provoked, they decided to move further up the passage and explore the crypts there, which appear to have been previously searched and looted, so they found nothing of value or of any interest.  Since the party did not search the area immediately near the statues, they did not attack, otherwise they would have.

They party was attacked by 3 Stirges which had recently made a nest behind the broken statue in Room 52.  This room had been previously occupied by Giant Carnivorous Flies which the party had killed in Game 2, but which was restocked and settled by the Striges.  Boyd was drained of 4 CON points of blood by the Striges.

The party made their first encounter with 3 Mongrelmen in Room 57 which had heard them searching room 56 and tried to spring an ambush on them, but Boyd saw them and so they party was not surprised.  The party killed them easily, and found quite a large sum of treasure.

Overall, it was a fun game this session and the party found quite a bit of treasure in coins, gems and jewelry.