This afternoon we continued our Pathfinder Game in the Barrowmaze megadungeon.  The party had exited the dungeon last session back to the City of Magnimar to rest up fully from the effects of blood loss from the attacks by Stirges that had attacked them (CON ability damage).

Zaid decided to purchase Bracers of Armor +1 and a few Potions of Cure Light Wounds with his share of the loot, and Boyd purchased a new suit of Breastplate Armor +1.  Vermithrax wasn't in any dire need of anything.  I roll to see if such items are available to be found in the City of Magnimar at any given time.  Once they were done, they set off once again to Barrowmaze.

I decided to mark areas previously explored as a Grey color and mark the new areas explored in this session in a Teal color.  I figured I would eventually run out of colors for each session, so from now on as each session progresses, I will change previous sessions to grey and mark current session in another color. 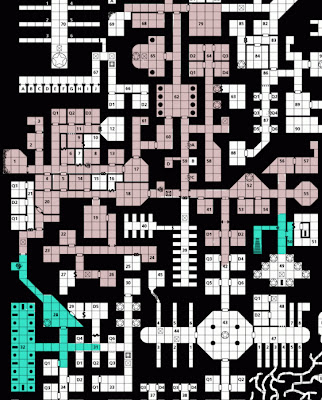 They traversed the now familiar corridors and hallways towards the area they had last left off exploring, this would be the hallway south of Room 55.  Once again Room 52 continues to be the monster magnet of the Restock Table and there were 3 Zombies waiting for them.  The battle was very brief and they were able to cut through them literally.

Once the battle was over, the party continued to the four-way intersection, whereupon they could see two more Zombies that emerged from the octagonal-shaped room, which saw them and moved to attack the party.  This too was a quick battle.

The party headed south and spotted the small 5 foot wide corridor heading west with a pile of rubble that seemed to suggest that there was once a wall covering the narrow passage.  They looked through the archway where thay saw a 5 foot wide corridor that was parallel to the passage they were in.  They decided to investigate the small 5 foot passage heading west.  There they found a set of stairs leading upwards to the south.  The stairs ended after ascending 20 feet to a smooth stone surface, as if something covered it.  They found a stone plug, that when pushed in, caused the slab to move aside.  They looked into the chamber that was revealed to them, a crypt.  The slab was actually a damaged sarcophagus.  The chamber was empty of anything of value but the chamber did have a doorway that led outside.

Exiting the chamber, they discovered that this was another barrow mound south-east of the main barrow mound they had been using to enter the dungeon.  The party was quite pleased that they had discovered another exit from the dungeon, as they have constantly worried that they could be trapped in the dungeon at some point, thinking that the main entrance was the only way into Barromaze.  They surveyed other mounds from a distance and saw several, only one other had a door, but it was sealed with a stone slab.  They went back into the mound and found the stone plug that closed the sarcophagus from below the stairs and continued their exploration.  They did note that it appeared quite evident that this staircase had been used previously by someone or something else.

Suddenly a huge swarm of centipedes erupted from the rubble pile, almost covering Boyd.  Zaid, stepped back away from the archway and poured oil from a flask just outside the archway, thinking it would slow the centipede's advance.  Boyd ran down the the small corridor, back through the archway to the main passage and slipped in the oil and fell prone.  The centipedes erupted forth in a wave of stinging bites, covering Vermithrax.  Boyd rolled out of the patch of oil and dug out his flint and steel to set the oil ablaze, just as the swarm crossed the archway.  The fire had some effect, but the swarm of centipedes was still too large in number.

Vermithrax managed to get back out into the main corridor north of the swarm and tried to toss a flask of oil onto the mass of insects, but his throw was off and it landed short, splashing him with burning oil.  Boyd stood, covered in the swarm and tried to swing at it with his great-axe, but to no avail, as the mass of insects were not affected by his physical blows.  Zaid tossed a burning torch into the mass but the torch alone did nothing to them.  Boyd succumbed to the numerous bites of the centipedes and fell unconcious and was dying.  Zaid ran to his friend's side and revived him with a healing potion.  The swarm then covered Zaid and he sustained only light wounds from their bites.  Vermithrax threw another oil flask and did not connect, again only splashing the swarm.  The oil only burned for a short time, but eventually over the course of a short period, it did eventually kill the swarm.  Vermithrax used his healing powers to help his friends and suffering from the effects of the venom in the centipede bites, they decided to head back to the city of Magnimar to rest up (and level up, as this encounter was more than enough to get them to 3rd Level.).

[GM's Note: The module originally has 6 Giant Centipedes listed in this location, but I decided to change it to a Centipede Swarm.  This made the encounter much more difficult, as the swarm is immune to melee weapon attacks and the only attacks that are effective against it are area attack spells and effects (such as splash weapons from burning oil.) ]

At this point, Vermithrax's player had to leave early for a family function.  The other two players still wanted to continue playing so they loaded up on healing potions, and more flasks of oil and headed back to Barrowmaze.  This time they went to another part of the dungeon where they descended a pit trap they had sprung in Game 1 and using their magical Rope of Climbing enabled them to climb down to the bottom and up the other side safely.  The passage south bent southeast at a 45 degree ange into a trapazoidal shaped room with two doors and the statue of a demon (actually gargoyle) with a missing left arm apparently looking at were it's left hand would be.  They found no sign of the missing arm in the room they were in, and search around the statue, but found nothing of interest.  They exited through the door in the southern wall where they again were confronted by the choice of 3 separate passages heading west, south and east.  The south passage showed a doorway on the west wall and the passage continuing.  The east passage held rotted tapestries along the north and south walls spaced every 10 feet.  The west passage seemed to open up into a large chamber.  They chose the west passage whereupon they found a 30' by 110' crypt running north-south containing pillars and stone slabs each with a skeleton dressed in tattered robes laying upon them.

Zaid entered the crypt and approached the nearest slab, whereupon all the skeletons animated and began to rise.  Zaid took a swipe at the skeleton nearest him and then backed out of the room.  The skeletons ran forth swiping at the two adventurers with their bony claws.  Zaid and Boyd had an easy time dealing with these skeletons as they formed a defensive line and slowly backed their way down the passage.  Not all the skeletons could attack in so narrow a space, and those that could had many of their blows miss or deflected away with weapon parries.  After defeating the skeletons, Zaid went to the northern stone slab and search it.  He found that one of the decorative bas relief roses carved into the slab's base could be pulled out slightly, he fiddled with it for a bit before discovering that it needed to then be turned and then pressed back into the slab to open a secret compartment that revealed a mace and a set of bracers.  They took these items and began to search the other slabs.  This took over an hour whereupon a group of 7 Fire Beetles looking for food entered the crypt and attacked them.  This was a quick and easy battle and they noticed that the glands of the beetles continued to glow and give off light after death.  They harvested the glands to sell them back in the city.  They continued their search but found nothing else and so decided to head back to Magnimar to discover if the mace and bracers they found were anything special.

At this point, we decided this was a good point to stop the game as it was getting time for one of the players to go home.  The mace turned out to be a +1 Bane Mace vs. Undead.  The bracers were Bracers of Armor +1.  The players commented that was too bad that Zaid spent gold on his magical Bracers of Armor +1, when they just discovered a set as treasure in the dungeon.  Ah well, you can't anticipate everything.

Posted by Greg Johnston at 9:14 PM