The players couldn't all make it to the scheduled game yesterday on Saturday, so we played today.

Once again our intrepid trio of Boyd, Vermithrax and Zaid went back to Barrowmaze, continuing to seek the missing halfling Pathfinder Society member.  They have come very close to finding him back around Game 3, but then decided to explore other passageways in further sessions.  They are beginning to think this halfling doesn't really exist.

The party decided to return to the general area of where they last left off their search.  This time, while passing into the room of the gargoyle statue with the missing left arm, there were 4 Sapphire Skeletons awaiting.  The players have learned to dread these monsters, but now that Vermithrax has been given the Mace of Undead Bane they found last game, this has proved a helpful tool in dispatching them and the gems that power their magical ability to reform. 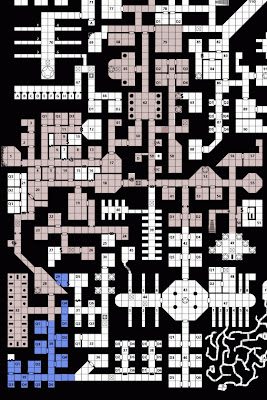 After they killed the skeletons, they decided to investigate the door on the angled northeast wall.  Boyd listened at the door and could hear whispers of a conversation in broken common mixed with animal noises seeming to be regarding the adventurers.  Boyd thrusts open the door to the room and charges in, attacking the 6 Mongrelmen within. He manages to kill one of them and the rest, surrounding him, deftly pummel him with their clubs to the point of near unconciousness (0 HP exactly). Vermithrax saves Boyd by healing him with Cure Moderate Wounds spell.  They make quick work of the Mongrelmen and one tries to escape but is killed by Boyd when it turned and tried to run.

The group decides to search the crypts to the south.  The major highlights of which are that they found the missing arm of the gargoyle statue and returned to attach it back on, upon which it's closed fist opens up to reveal a pearl.  Verminthrax detects strong transmutation magic but is unable to discern its magical properties.

They entered a crypt of 10 burial niches with skeletons in them standing at a slight reclined angle.  One of the skeletons wore a blue robe and had a blue conical wizards cap upon it's head.  Vermithrax detected abjuration magic in a scroll tube tucked in the skeleton's robe and transmutation magic in the hat.  He decides to take the two items and all 10 skeletons animate and attack.  The players were only expecting the robe-wearing skeleton to do something, not the other 9 skeletons.  So, they were a bit surprised.

The party has explored the southwest corner of Barrowmaze and are now searching the crypts east of the four-way intersection south of the Gargoyle statue room.  They killed 2 more Ghouls and 8 Dire Rats before the session ended.

The next game won't be until February 23rd as each of us have other plans on different weekends until then.

Posted by Greg Johnston at 7:53 PM