Yesterday, I posted a Pulp-o-mizer cover for Gamma World.  It got me thinking about the 1st Edition Gamma World box cover art, and how it is reminds me of a Pulp magazine cover in presentation.  Looking at it further, that evocative cover doesn't really present the contents or the setting of the rulebook inside the box.

The cover shows a group of humans wearing matching uniforms.  Most are armed with seemingly high-tech weapons and gear.  It gives the impression of a group of explorers that presumably could have landed in a spaceship and are surveying to ruins of a city.  None are wearing armor.  None are equipped with primitive weapons.  None are mutant humans or animals.

The implied setting is a future Earth destroyed hundreds of years before by some terrorist group calling itself  "The Apocalypse".  It was an Earth that had energy weapons, robots, and other wondrous technological marvels.  It always seemed to me that the designers of the game never really settled on a definite vision of the kinds of artifacts and time period in which Gamma World occurred.  Whereas the 1st Edition Gamma World boxed set presented a far future Earth with sci-fi inspired artifacts, many later supplementary products would show art-work of humans and mutants using 20th-Century 'Stop'-signs as shields, or Parking-meters as clubs or using gun-powder weapons. 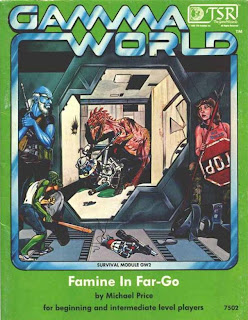 Really?  You would think that in a world that had Mark V Blasters and Flit Cars, the last thing you would see is a Stop Sign or a Parking Meter.  Such things would have been relegated to obsolescence long ago.  It's just that sort of thing that makes it hard to suspend your disbelief.  The designers kept introducing 20th Century imagery into a world that was supposed to be in the 24th Century.

Oh, I suppose those humans on the box cover could all be Pure Strain Humans who are so well organized enough that they want to dress in matching uniforms and helmets.  And they all just got so lucky to have fully-functioning technological weapons and artifacts.  Maybe they are part of the Reconstructionists or Knights of Genetic Purity.  Maybe. 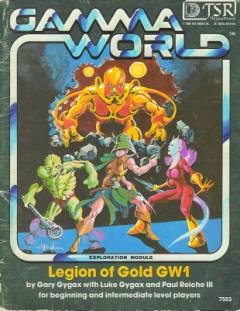 I think it would be a better premise to run Gamma World as a pulp science-fiction game.  The characters would not be native to the planet, maybe the survivors of a crashed space-ship.  Survivors that must now explore and learn to survive on a hostile world with radiation, mutants and crazy killer robots.  And just because our intrepid pulp-flavored PC's come from a technological society, doesn't mean they will be able to easily figure out the wondrous tech artifacts of Gamma World.  Think of how advanced the alien Krell technology was in the movie Forbidden Planet.  Even Dr. Morbius wasn't able to figure out (or even control) most of the Krell machines and he spent most of his lifetime studying them.

I think that would be much more fun than playing primitive screw-heads wearing chain-mail armor, carrying Stop-sign shields, wearing their 'No Nukes' T-shirts and armed with their laser pistol.  Or, I could be wrong.

Posted by Greg Johnston at 6:06 PM