It seems like a long time since my players and I got together to play our Pathfinder game. I believe it was January 27th was the last time we played.  February was a busy month for all of us as we each had some activity already planned.  We tried to set up a game around March 2nd, but one of the players had a stomach illness and another had taken their dog to the veterinarian to treat a virus infection.  It is a virus that isn't contagious to humans, but it can be passed on to other dogs from humans.  So my player didn't want to possibly infect my dog.  I appreciated the thoughtfulness.

So we did manage to play our 7th session of Barrowmaze using Pathfinder tonight.  At the end of last session, we froze the game in the dungeon and picked up where we left off.  The party traveled east down the corridor flanked with funerary curtains that covered the entrances to several burial crypts.  They didn't encounter any monsters, as these crypts were empty, except for a few coins and a jeweled bracelet of low worth. 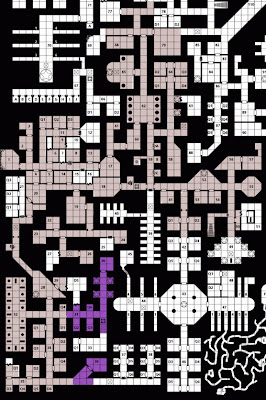 Our cast of characters:

The passage ended in a T-intersection heading north and south.  In the south passage there was an open 10-foot deep pit blocking the passage with continued into a chamber.  The north passage had four alcoves containing stone statues before it ended in a door.  Deciding to head north, the party investigates the statue in the first set of alcoves.  The statues appear to be of beautiful women wearing togas and bearing swords.  Boyd the barbarian notices the statue seems to be alive before it lashes out at him.  His two-handed waraxe breaks and subsequently is destroyed in the encounter.  Vermithrax's magical Undead Bane mace is also broken, but not beyond repair.  When the statue (actually a Cayatid Column) is finally destroyed, the sound attracts a rat swarm from the door at the end of the passage.  The bottom 3 feet of the door had been chewed away at some point, most likely from the rats.  The party threw flasks of oil and alchemist's fire, slowly burning the swarm.  Boyd ran up with his great-club and smashed many rats before the swarm broke up and the remain rats fled.

Investigating the room where the rat swarm came from, it contained many square burial niches, which it took Boyd and Zaid about 2 hours to search thoroughly and they found some treasure.  Vermithrax used his Mend spells to repair Boyd's greataxe and his magic mace which were damaged by the Cayatid Column.

The party then decides to head down the south passage.  They use their Rope of Climbing to descend the 10' pit blocking their path and then use it to climb up the other side.  Boyd prepares to continue when another pit opens immediately next to the one he just exited.  He jumps back, avoiding falling into another 10' deep pit lined with iron spikes and coated with a green substance.  Judging that they would not be able to cross the bottom of the spiked pit without injury or risk being poisoned, they look at their map and they believe that the chamber past the pits can maybe be accessed by going back to a section of the dungeon that looks like it might connect to it.

So the party heads back to this part of the dungeon and head up an angled hallway going northeast that ends in a door.  Boyd opens the door and a horrid stench wafts out.  Boyd gets sickened by the odor, however Zaid and Vermithrax are not affected by it.  They enter the room and find a large pile of offal, dung, cadavers, trash and other refuse inside.  They begin looking around the chamber when the pile shudders and a large creature with three tentacles, three legs and a very large mouth emerges and begins to attack.  Two of the tentacles have flattened ends that are lined with spines.  The third tentacle has several eyes set in it.  This is an Otyugh.  This was the major battle of the night that led to Boyd being killed.  Zaid and Vermithrax decide to head back to Magnimar with Boyd placed inside the Bag of Holding.  Their perception rolls weren't good enough to find the only treasure in the room (a +1 Ring of Protection).

What followed was a long discussion between the players as the best course of action.  Whether it was feasible and/or sensible to bring Boyd back to life by a Raise Dead spell and having two Restoration spells placed on him (to remove the two permanent negative-levels from Raise Dead) or roll up a new character.  Since I ruled that bringing in a new character would start at 2nd Level, the player of Boyd didn't want to have to have to spend several sessions to get to 3rd level (which is where the other two characters are at).  I'm using Pathfinder's Slow XP progression for that Old School feel.

So the players decide to get a Raise Dead spell and the two Restoration spells cast on Boyd.  This cost them around 8,000 gold pieces, which meant they practically had to sell many of the few magic items they had and almost all of their gold.  They are practically poor again.  Yippee!!!  Now they have a greater motivation to go back to Barrowmaze and replenish their wealth.  They better hope that nobody else dies, because they won't be able to afford another Raise Dead anytime soon.

Posted by Greg Johnston at 9:17 PM