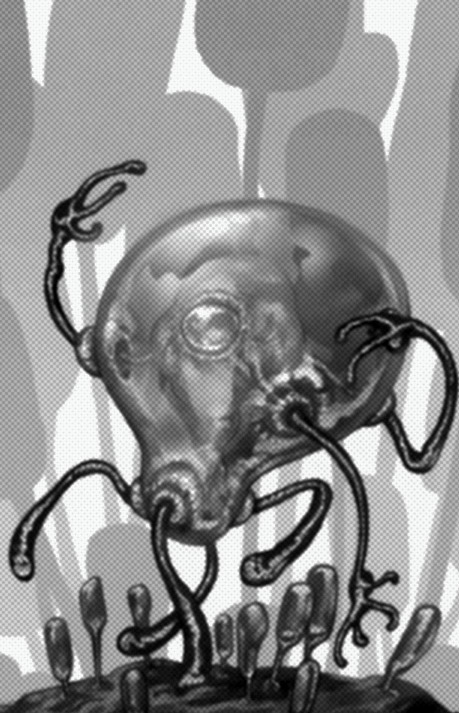 These ultraterrestrial creatures appear as a pinkish blob that has a large red circular region on it's body that is most likely an eye.   Thet stand about 2.5 meters tall.  The Hlosh are surrounded by a tough but pliable transparent membrane that protects them from harm. This membrane allows the creature to extend it's 3 manipulator appendages and 4 locomotive appendages in order to interact and move with the outside environment. It is believed that membrane is some kind of bio-organic encounter suit which is under pressure with the native atmosphere that keeps the Hlosh alive. These alien creatures are usually encountered in ruins where they are found exploring. They sometimes capture other creatures for study. They usually carry strange alien devices and weapons to protect themselves.

Motive:  Exploration
Environment: Small parties of explorers found near ruins.
Health: 6
Damage Inflicted: 4 points
Armor: 4
Movement: Short
Modifications: Level 5 with Numenera
Combat:  Hlosh will usually only attack if they feel threatened.  If they are reduced to 2 health, it means that the structure of their membrane has been compromised.  At that point they will withdraw all appendages within their membrane and will dimensionally phase out of the physical world, back to their home dimension.  While in their home dimension they can regenerate from their wounds a 2 points of damage per round.  Once they are back to full health, their membrane is repaired.  If brought to 0 health, the membrane ruptures and the Hlosh begins to rapidly decompose as if exposed to a corrosive atmosphere.
Interaction:  The Hlosh are intelligent, but being aliens they do not understand the language of the Ninth World.  Their agenda is unknown but they seem interested in the technology found in ancient ruins.  They are curious of other life-forms and if they can overpower a creature safely, they will do so in order to study it for a period of time before going on their way.
Loot: Hlosh will usually have 1d6+2 cyphers with them that they have found in nearby ruins or taken from sentient subjects they captured for study.

Posted by Greg Johnston at 3:34 PM