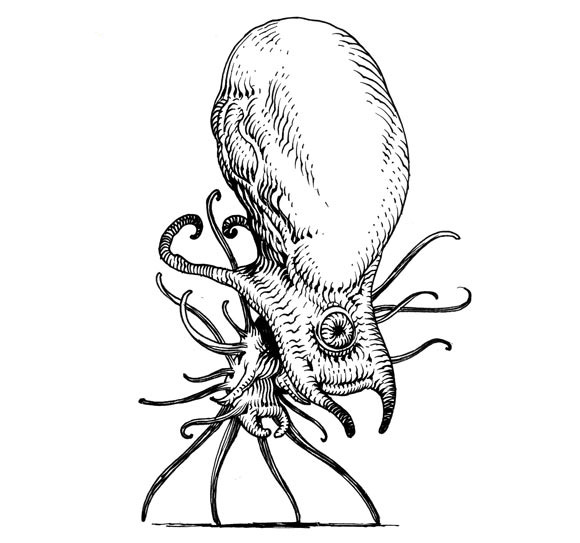 Krthateli are transdimensional aliens that make raids to capture humans as slaves for physical labor.  They appear octopoidal with an over-sized head dominated by a single large eye.  Their small torso and large head are supported by four tentacles used for mobility.  They have several manipulator tentacles that sprout from their small torso and sides of their head.  They have a mouth-slit in which they ingest food, but they do not communicate verbally.  They wield a variety of weapons and numenera devices.  Krthateli stand approximately 2 meters.

Motive: Capture slaves.
Environment: Anywhere, usually in groups of two to eight.
Health: 12
Damage Inflicted: 4
Armor: 0
Movement: Short
Modifications: Might defense as level 2, Perception as level 5, Understands the numenera as level 6, level 5 in any defense rolls involving cold attacks.
Combat:  Krthateli are usually armed with numenera weapons, most notably the Stun Rod.  A hit with this device is defended by a Speed defense roll.  If struck by the cold, blue beam, the target must succeed in a level 6 Might roll or fall unconcious for an hour.  The Krthateli also have several psionic abilities, which only affect organic targets that have brains.  These do not affect automatons:
1) Mental Illusions.  Can create mental projections that appear real.  A target of these illusions must make a Level 6 Intellect defense roll, or believe the illusions to be real.
2) Invisibility.  The Krthateli can bend light around them to make themselves invisible.  Any attacks made against them are at Level 6.  If they attack, they lose their invisibility that turn.
3) Cause Fear: The Krthateli can telepathically probe a target's fear centers in the brain and can induce severe panic.  The target must make a level 5 Intellect defense roll or flee in a panic for 1d6 minutes.
Interaction:  Krthateli are highly intelligent.  They communicate by telepathy.  They do not have a high regard for humans, whom they equate more as work animals.
Use: A local community has had several of their number abducted by a group of Krthateli which have taken them to nearby ruins as slave labor to clear out rubble so that the Krthateli can get access to something within.
Loot: Stun Rod artifact device (depletion 1 in 1d10), range 6 meters.  1d6 cyphers.