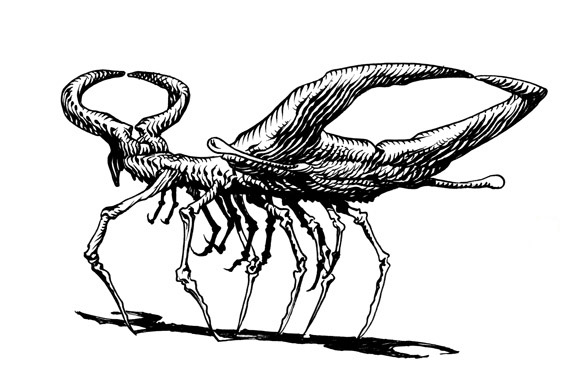 
Man Catchers are large insect-like creatures about 1 metal tall and 2 meters long.  They are covered in a hard chitin.  They have a prominent set of large pincher-like mandibles on their head which they use to grab prey and crush them.  They also have a smaller set of pinchers attached to the back of their abdomen which is flexible, allowing it to make strikes against any prey grabbed by the large mandibles.  The Man Catcher has two stalks that grow out of each side of it's head that end in a cluster of ocular sensory organs.  This allows it to see in all directions at all times.  They are usually encountered in small groups of two to four that are on the hunt for prey.

Motive:  Hungers for flesh.
Environment: Any wooded area or jungles.
Health: 9
Damage Inflicted: 4 (Large mandible), 3 (tail pincher)
Armor: 2
Movement: Short
Modifications: Climb as level 4
Combat: When a Man Catcher successfully attacks a character with it's large mandible, he must make a Might defense roll to avoid being held fast by the crushing mandibles.  Anyone held by the mandibles automatically take damage each round.  Any physical actions the captured target attempts will be increased by one step.  The Man Catcher also gets to attack any held prey with its tail pincher at Level 5.  Attempting to break out of the hold takes an action which requites a Might-based roll.
Interaction:  Man Catchers are predatory animals.
Use: Some local communities consider Man Catchers a tasty delicacy.  Though very dangerous to hunt or catch, they are usually roasted over an open fire and their shells cracked open and the juicy and cooked insides are eaten.  Some merchants are willing to pay several shins for each Man Catcher brought to them dead or alive, but preferably dead.

GM Intrusion: Several Man Catchers gang up on one PC in order to bring down their prey quickly.  If the character is grabbed by any of the large mandibles and does not break free, the group begin dragging the PC away in order to eat their meal.