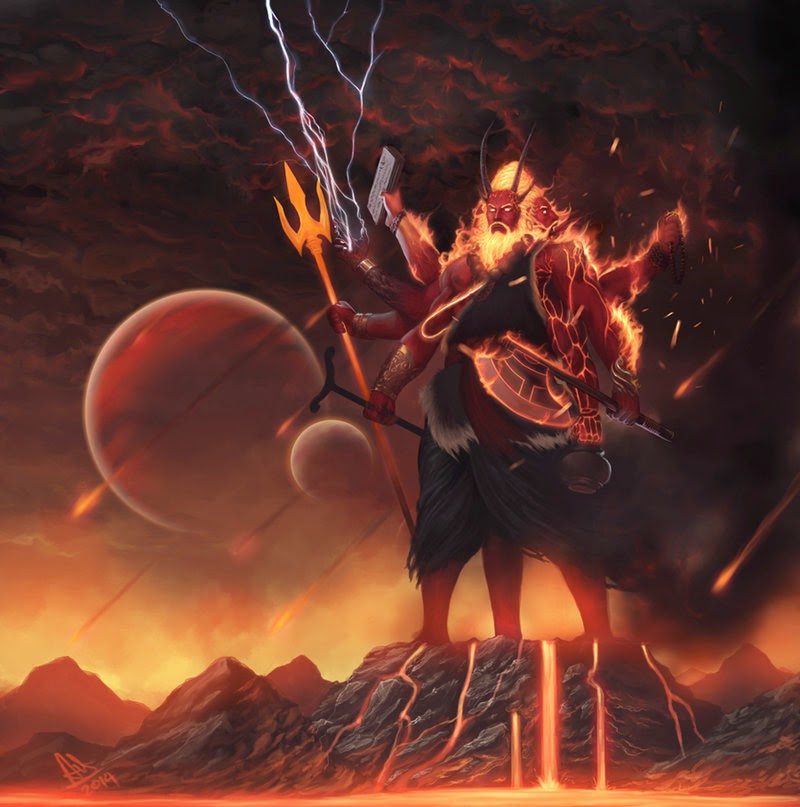 Hemakt appears as a giant man with three heads and 3 legs and seven arms.  He has red-skin and his body is aflame.  He dwells in a realm of volcanoes and lakes of lava.  He dwells in a basalt palace where he spends his time creating and displaying items of great workmanship.  Hemakt is believed to be the god that helped the men of Xhuul ascend from the barbarism caused by the great cataclysmic war that devastated the planet.  He guided them to rebuild cities and spark the fires of imagination and inspiration to create tools, weapons and armor.

The temples of Hemakt serve as meeting halls for crafts-persons, especially armor and weapon-smiths.  The temples contain some of the best forges and are the closest thing to a factory.  Many craftsmen gather to pray for inspiration and blessings before starting their next project.  Typical sacrifices to Hemakt are made upon the Altar of Making, a large slab of iron with a flaming brazier atop it.  Sacrifices usually are various metals, even precious metals such as gold or silver and finely crafted items which are thrown into the fires to be consumed. 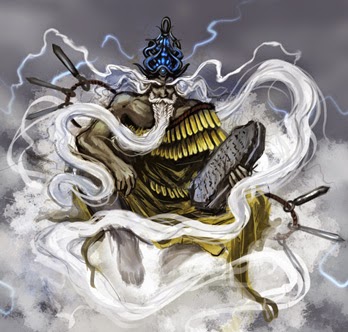 Hoom-Vool appears as a wizened old man who resides among the clouds in the sky.  He lives in an opulent palace known as the Sapphire Court which floats among the clouds, protected by gale force winds and arcs of lightning.

Hoom-Vool walks among the clouds, casting his  his gaze down upon the mortals below, always observing and judging.  He carries with him a stone tablet upon which are inscribed all the laws of the land immediately below him.  Hoom-Vool immediately becomes aware of any mortal that breaks these laws.  Officials often invoke Hoom-Vool prior to the convening of trials and is thought to watch over all courts of law and proceedings.  Merchants often invoke the god's name when writing up contracts and making agreements.  Those who violate the law and terms of agreement can expect Hoom-Vool to summarily pass judgment with a bolt of lightning.

Hoom-Vool is also popular with farmers who pray to him for favorable weather for their crops.

Posted by Greg Johnston at 8:07 PM