When we last off, the party had just finished killing a spider inside a spiked pit trap.  They found a human wrapped up in some webs down in the pit and rescued him (this is supposed to be a new party member, but the player could not make this game and he had not submitted his character yet) and he agreed to join the party.  Most of the party were reeling from the effects of the spider venom which weakened them, so they decided to return to Throxia and rest.

The party is as follows:

Returning to Throxia, the party stays at a local inn known as The Lion's Den, where Abazu heals them and tends to their wounds from the spider venom.  The following day, the group decides to head back to the Emerald Spire.  They purchase some additional gear, supplies and healing potions and set out for the dungeon.  Their journey across the Badlands (the ruins of the old ancient city outside Throxia) is uneventful and they reach the dungeon without incident. 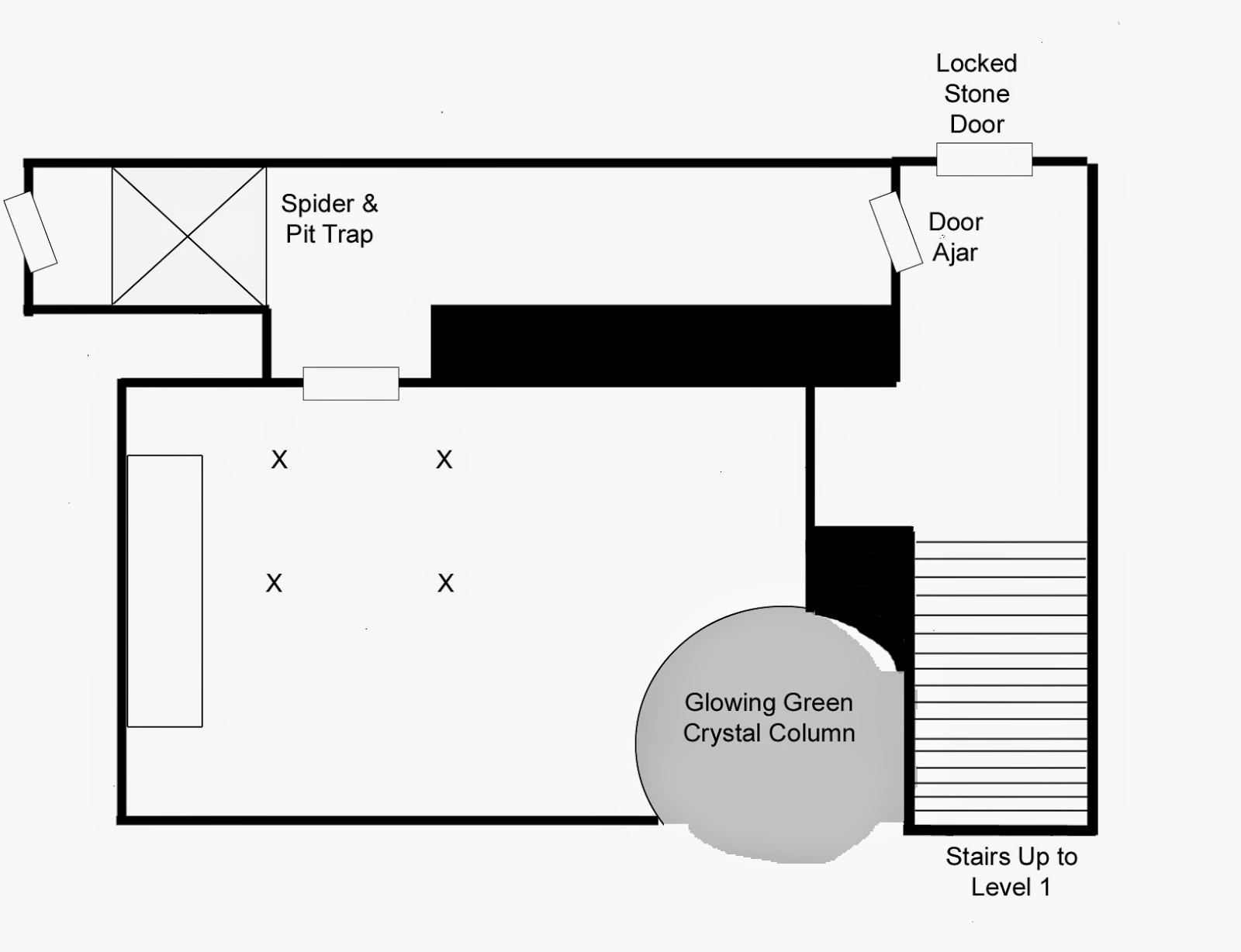 The party arrives back down to the 2nd level (see map ), where they decide to investigate the door south of the pit where they fought the spider in the last session.  Kaleb listens for noise and does not hear anything.  Checking for traps, he finds none.  Yaotl opens the door wich swings outward into the hall.  Inside, they see a large room, bathed in a pale greenish light.  The light comes from the green crystal column that takes up the corner of the room.  To their right they see a large table with the remains of human bodies and the remains of a spider.  It appears this is some kind of laboratory where someone is experimenting with the bodies, as one of the human bodies has had it's limbs removed and replaced with the spider's legs.  One of the bodies has had all its organs removed.  The table is stained with dried blood and contains various vials and a block of wax with needles and thread stuck in it.  Below the table is a bucket filled with blood.

Kaleb checks for traps and he notices a pressure plate in the floor and determines it's area (marked by the "X"'s on the map and outlines it with chalk and then successfully disarms it by placing a metal shim in the gap in the floor.  He checks the rest of the room and finds nothing else of interest.  Yaotl inspects the bodies and notices that one of them is twitching slightly.  Fearing some undead monstrosity, he begins to sever the heads off the bodies with his axe.  The bodies stop twitching.  Kord inspects the table's contents and finds two vials and a scroll tube.  Kord and Abazu determine the potions to be Cure Moderate Wounds potions.  The scroll tube contains two magic scrolls, one of Fireball and the other with Fly spell.  There is a third parchment within that contains a sigil that is similar to the one they found on the green crystal column on Level 1 but this one translates as "four".  They do find another another sigil on the green crystal column that translates to "two".

They decide to leave the room.  They see the door on the other side of the pit is ajar, as if propped open by a chunk of stone.  With no easy way to get across the pit, they decide to leave it for now and go check on the locked stone door that baffled Kaleb's earlier attempt to open the day before.  This time, by taking several minutes and using his new masterwork thieves tools, he manages to open the lock. 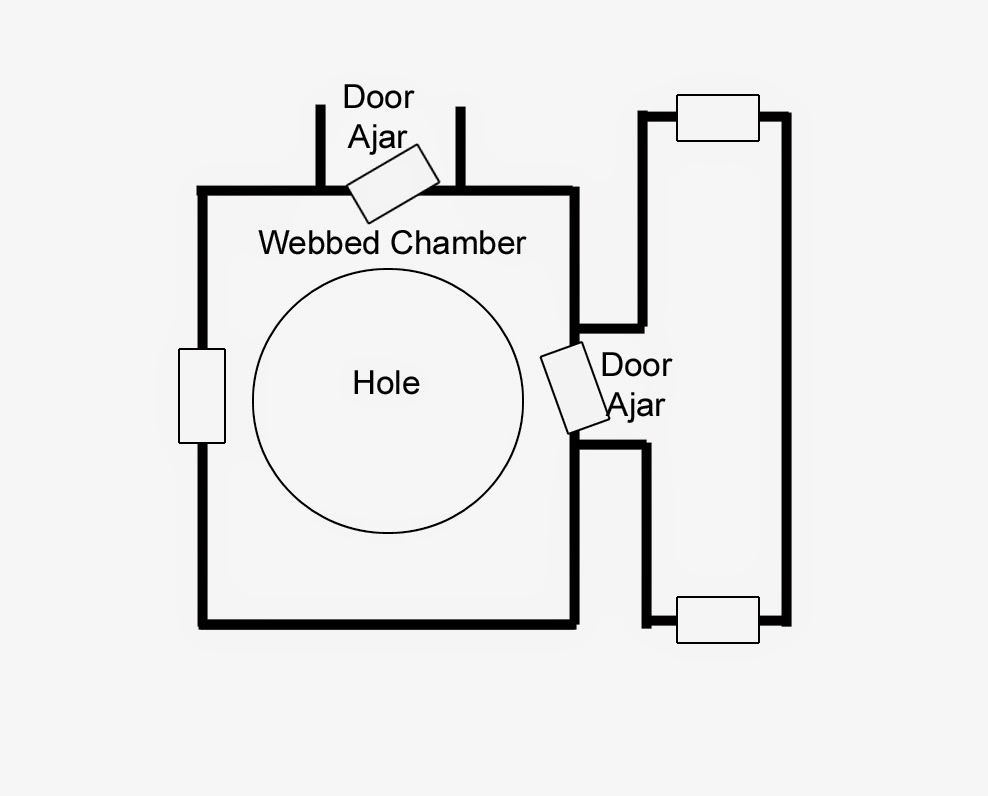 Beyond is a hallway which is dimly lit by the strange lichen that gives off a whitish-green illumination.  The hallway runs 35 feet ending in a closed stone door similar to the one Kaleb just opened.  Midway down the hallway on the left side is a small indentation that has a stone door which is ajar with a piece of stone propping the door open.  Checking for traps along the way, Kaleb finds none.  Yaotl again takes point to check out the door that is ajar.  Beyond is a large chamber approximately 30' x 30' which is covered in webs from floor to ceiling and several spots on the floor is layered with webs as well.  They see what looks to be a large hole in the middle of the chamber, a steel ladder leading down into the darkness.  Yaotl ignites a torch and begins setting the webs on fire, trying to clear a path to another door they can see exiting the chamber which is also ajar.  They do not see the door on the opposite side of the chamber as it is block by the webs.  A few moments later they see one of the same spiders they fought in the pit scuttle from the chamber through the other ajar door.  Meanwhile another spider attacks from the webs.

There is a fight that lasts several rounds and the spider is defeated.  The party spends several minutes burning away all the webs and searching the chamber.  They toss a lit torch down the hole which drops about 90 feet down.  Yaotl and Abazu see something at the bottom of the hole but can't clearly make out what it is.  The party decides to descend down the ladder and prepare ropes just in case the ladder rigged to collapse.  They descend without any trouble and find that the object they say is a dead spider on its back with its legs curled inwards.  They see what look like several gouges in its underside like those caused by an edged weapon.  Also at the bottom of the hole is a set of stairs leading downwards.  Figuring that it is the stairs to the next level, they decide to ascend the ladder and finish exploring the 2nd level.

When they make their way back up, there is a welcoming committee of 4 skeletons waiting for them.  One of the skeletons is dressed in tattered robes and armed with a bastard sword.  It shouts out "How dare you enter my sanctum.  Prepare to die!  Attack them!"  With that the skeletons attack.  The robed skeleton and one of his skeleton minions were standing in the door way to the "north" of the chamber.  The other two skeleton minions were standing in the doorway exiting the chamber from the "east". The robed skeleton casts a spell at Kord, a shimmering beam of purple and black energy.  It washes over Kord, but he successfully resists the magic.   The skeleton beside the robed skeleton advances in front of it's master, preventing any of the party from engaging him.  The other two skeletons advance and attack the closest party members.  This was a tense fight, the party was wounded from their fight with the spider in this chamber, as soon as the regular skeletons were defeated, I had two of the spiders come in from both ajar doorways to ramp up the tension.  The spiders let loose with their obscuring mist ability to make matters more dire.  There was a pitched spell duel between the robed skeleton and Kord in which each had touch spells charged, but each kept missing their attacks for 4 straight rounds.  This was further hampered by the obscuring mist as well.  Everyone was concerned what spell the robed skeleton had cast that it clearly wanted to affect Kord wth.  Eventually, the robed skeleton hit with his attack.  It was the Touch of Idiocy spell and Kord immediately lost 6pts from his INT, WIS and CHA stats, which reduced him enough to not being able to cast spells.  The next round saw the defeat of the robed skeleton but the party still had to deal with the spiders.  Eventually, one was killed and one of the spider, severely wounded, fled out the "north" door.

After the battle, the party searched the robed skeleton and found a finely-crafted bastard sword, around his neck they find pouch on a strong around his neck.  Inside they find a vial containing a silvery liquid, and a small token made out of the same green crystal from the column.  Also around his neck is a fine chain on which is a key.

Kaleb checked out the corridor beyond the "northern" door to the chamber and found that it led "east" about 35 feet.  At the end of the hall were two stone doors across from each other, one going north and the other south.  The south door seems to line up with the door they did not open at the end of the hall just past the ajar door past the chamber.  Kaleb immediately noticed on the "west" end wall of the corridor which is right outside the "north" ajar door that led into the chamber was an open secret door.  Looking within was a short passage about 15 feet where another secret door was open and that it led into a larger chamber beyond.

Severely battered and out of spells, with Kord a near idiot and about half the group suffering from spider venom, they decide to exit the dungeon and return to Throxia for several days to recuperate. About half-way back to Throxia, the spell affecting Kord finally wears off.

Posted by Greg Johnston at 2:58 PM