The party spends 4 days resting up ability damage from the spider venom.

Our intrepid adventurers return to the Emerald Spire and descend the shaft on level 2 down to level 3. From the bottom of the shaft is a flight of stairs leading down to the first chamber on Level 3. The chamber that is dimly lit by small oil lamps set in the walls, casting dim light.  A gate of iron bars blocks the way to the north.  To the east is a small fight of steps that leads to a landing.  The east wall of the landing is a stout iron-banded wood door.  The door is flanked by two arrow slits on each side. (Area C1) 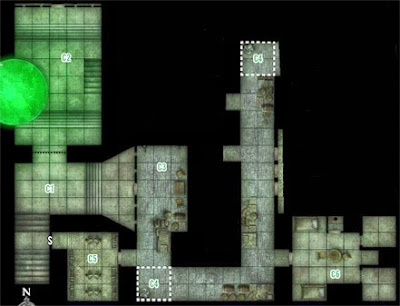 Kaleb checks out the gate to find it is locked.  Beyond the gate he sees a chamber with a small flight of steps descending along the east wall about mid-way into the chamber.  The west side of the chamber is the familiar green glow of the green crystal column they have seen of the previous two levels.  On the far north side of the chamber is a small flight of steps that lead to a landing with a similar stout iron-banded door set in the center and flanked by two arrow slits on either side of the door. (Area C2)

A few moments go by when suddenly Kaleb is hit with a few crossbow bolts from the arrow slits from the east side of the chamber.  Acheron pulls out his Horn of Fog and begins blowing, causing the mists to roll forth to provide cover from their unseen attackers.  The party then starts heading towards the landing.  Soon, the chamber is covered in mist from the magical horn.  Kaleb reaches the door and discovers that the door is locked.  His attempts to pick the lock prove fruitless.  Yaotl tries to use brute strength to break through the door, but to no avail.  Abazu tries to stab at one of their attackers through one of the arrow slits with his longspear, but isn't really doing much.  Kord casts a Burning Hands spell through the other arrow slit where attacks have been coming from.  His flames apparently connect with a target as he hears a scream from a man on the other side.

Their assault on the door and their attacks against the men on the other side proves to be slow, as the intervening wall provides full cover.  The party discovers that the bolts fired at them are poisoned (drains CON) from the few that do hit them.  Finally Kord gets the idea that since he is a small enough, he could squeeze through the one of the arrow slits that doesn't seem to have an attacker on the other side.  He communicates this to Kaleb in the Halfling language, hoping to coordinate it with him so he will do the same thing.

Both of them manage to squeeze through the arrow slits and discover two humans armed with crossbows on the other side. (Area C3).   One of the humans runs to a runs to the north wall where a rope is suspended and he pulls the rope several times.  Somewhere in the distance a bell is sounded.
Kaleb and Kord manage to kill the two guards and unlock the door which was also secured by a wooden cross-bar.

The party spends some time searching the room.  On the same wall that the rope was suspended from, there is also a lever.  Acheron pulls the level and the party gears a mechanical sound in the wall.  Soon, the reinforcements that were alerted by the alarm raised by the guards arrive.  These are 3 more humans armed with crossbows, swords and leather armor.  The party make quick work of two of the guards, but one of them happens to duck into a door off the small passage to the south of the guard room, close the door and lock it. (Area C3).

This is where Game 8 ended and we froze the game to pick up next time for Game 9.

So at the start of Game 9, Kaleb checks the door to C3 for traps and finds none.  He picks the lock and has Yaotl open the door, ready for the guard on the other side.  They find the room is an armory with weapons and armor stacked on racks.  But there is no guard within the room.  Kaleb begins searching and discovers the secret door, which is a one-way door that opens out into the stairway the party entered the level on.

Suddenly, that guard appeared back in the guard room, having used the secret door to get behind the group and tried a sneak attack on Acheron but failed.  The others managed to kill him quickly.  The party then searched the armory and took an inventory of the weapons and armor that they would take on their way out.  They then proceeded cautiously down the east-west hallway south of the guard room.

(GM's Note:  The areas marked C4 on the map are traps that I decided to remove from the level.  I did not want to slow the game down with Kaleb inching along checking traps every 5 feet.  He has a feat that allows him to detect traps without actively searching for them.

When they reached the door outside of C6, Yaotl could see all the way down to the other end of the north-south hallway.  I noted that they saw 3 doors spaced next to each other on the east wall and each one was open.  The guards that responded to the alarm had opened these doors on their way to the guard room to alert the men in there.  Those men had taken up positions to the sides of the doorways and one was across the hall in the 5 foot hallway.  They were watching the party, planning to sneak attack them if they approached.)

The party decided to open the door to C6 and investigate the room there.  It appeared to be both a bunk-room and a small jail.  The party searched the room.  Kaleb opened the cell to the south and Acheron approached the cell to the north.  Then a strange sound started that sounded like several different voices, screams and nonsense all happening at once emanated from the cell in the north part of the room.  An amorphous creature with many eyes and mouths slithered out from under the cot in the cel and oozed through the bars to attack Acheron.  This was a tough battle with a Gibbering Mouther.  Kaleb was swallowed whole at one point of the battle and Acheron took most of the damage from it's attacks.  They managed to kill it, but by the time they did so, they were low on spells and healing, so they decided to leave.  They grabbed the gear from the armory and Kaleb made a few Disable Device checks to sabotage the secret door, the gate and the main guard room door on their way out.  He hoped this would help them get easier access the next time the came back.

Posted by Greg Johnston at 6:02 PM